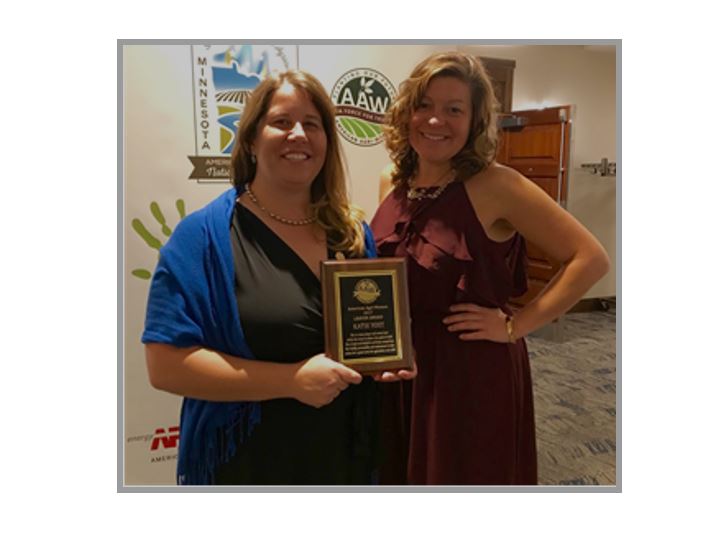 AAW coined the LEAVEN Award as a means of elevating its members. AAW presents the LEAVEN Award to those members who, to an outstanding degree, have acted as “leaven”. “Leaven” another word for yeast, is a small element that can interact and influence everything around it. It permeates and raises the elements with which it is mixed. Leaven multiplies its effectiveness for good. Nominated by her peers, Yost exemplifies the meaning of the words that make up “LEAVEN”:  Loyalty, Enthusiasm, Anticipatory, Valiant, Effectiveness, and Nurturing.

When presented with the award Yost stated, “It was such an honor to receive this award from the members of American Agri-Women, some of which I consider great friends.”

Yost cultivated a long history with AAW. First attending with her mother and sister over ten years ago. She then chose to pursue a more active and influential role within both the national organization and her local affiliate. Yost is American Agri-Women's current Treasurer and she is past Treasurer of the American Agri-Women's Foundation Board where she served a six-year term. In her state organization, Montana Agri-Women (MAW), she served as Secretary for seven years and she has also served on the Fair Committee where they host a live animal farm for over 100,000 state fair attendees to view complete with educational interactive agricultural activities, kiddie rodeo, and presenters throughout the duration of the fair.

Her agricultural pursuits did not start with AAW and MAW. Growing up on a small farm on the outskirts of Billings, she learned the importance of agriculture. She extended that belief working for the family business in the accounts receivable department of Nutra-Lix, Inc. Her family’s company is celebrating a 30 year history of manufacturing and providing liquid feed supplement for horses and cows across a five-state region including Canada. However, that is not her only job related to agriculture as she keeps busy doing the financial books for National Trucking and part-time helping with the National Team Roping Tour.

About American Agri-Women
American Agri-Women (AAW) promotes the welfare of our national security through a safe and reliable food, fiber and mineral supply. Since 1974, AAW members have worked together to educate consumers; advocate for agriculture; and offer networking and professional development opportunities. For more information, or to join, visit AmericanAgriWomen.org. Find AAW on social media at: facebook.com/AgriWomen and twitter.com/Women4Ag.