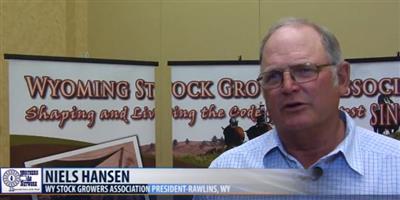 LARAMIE (June 2, 2016) – Leaders of Wyoming’s cattle industry are meeting this week in Laramie just steps away from the campus of the University of Wyoming. “Educating for Ranching in the 21st Century” is this year’s convention theme and Wyoming Stock Growers Association (WSGA) President Niels Hansen from Rawlins is excited about this year’s program.

Gwen Geis is a rancher from Gillette, WY and has a big role in Wyoming’s cattle industry. She represents the Wyoming Stock Growers Association on its and also serves as a board member for the American National Cattlewomen (ANCW).

The WSGA has really worked hard to encourage young producers to join the association. This past December WSGA created the Young Producer Assembly of which Cheyenne rancher Kendall Roberts is the chairman.

This week the U.S. Supreme Court upheld landowners rights when it comes to challenging the EPA and Army Corps of Engineers controversial Waters of the U.S. Rule (WOTUS). Wyoming U.S. Senator John Barrasso like the cattlemen and cattlewomen in attendance was pleased with the ruling.

A lot of ranchers utilize Wyoming’s public lands to run their livestock. Ethan Lane is the Public Lands Council’s Executive Director and shared some of the opportunities and challenges for today’s public lands rancher.