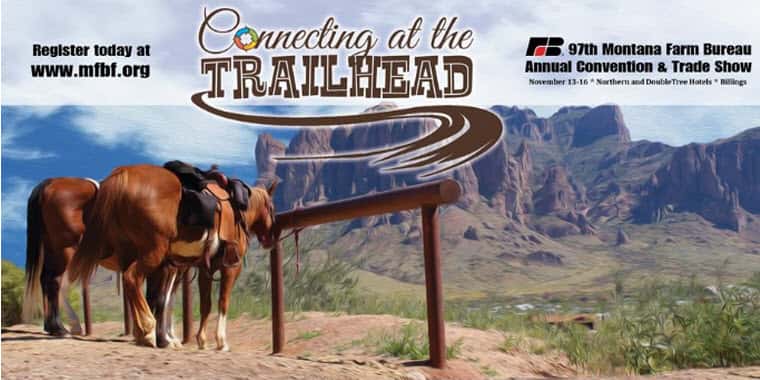 Inspirational speakers shared their thought on leadership and advocacy today during the 97th Montana Farm Bureau Annual Convention in downtown Billings. The morning kicked off with Vance Crowe, director of millennial engagement for Monsanto, explaining one needs to not only tell their story, but realize new ideas are coming along that will change the conversation about agriculture.

“A mountain has grown up between the famers and the urban public with the result being a fear among consumers that is spreading,” Crowe explained. “Everything around us is built on the backbone of agriculture. However, never in the history of humanity has there been a larger shift of people than over the past 100 years for agrarian to urban. A lot of people don’t understand agriculture and they don’t understand about weeds or blight. This means people involved agriculture need to outcompete pseudoscience. You need to let the public know that you are a farmer and you do care. Once you can show shared values, people will listen to you.”

American Farm Bureau Women’s Leadership Committee Chair Sherry Saylor talked to the luncheon crowd about leadership, which reflected on Crowe’s encouragement to visit with the public. She cited the four hallmarks of leadership—composure, conviction, connection and courage. “It’s the connection you make with the public that will build trust. If you are transparent and have trust, then you have a good relationship,” noted Saylor. “People want to know their farmer and know where their food comes from. Remember, it takes courage to be a leader, to lead from where you stand and stand by your convictions.”

The school guidance counselor noted, “The future is in our classrooms now. It’s important to encourage agricultural literacy in children.”

Karen Budd-Falen, a Cheyenne attorney specializing in property rights, spoke during the Century Club Breakfast. The Century Club is a membership funding level that helps with organization’s legislative and legal efforts. Budd-Fallon said, “I believe farmers and ranchers are the forgotten Americans. It’s important for them to realize that even through the Administration will change in Washington, D.C., keep pushing. Take the time to look at executive orders, see what’s in them and make sure that they’re not ending up in the BLM’s handbooks.”

The lawyer explained that it’s critical to keep tabs on what’s happening with the Endangered Species Act. “Even though recently they passed a rule that made it harder to list something as an endangered species, the U.S. Fish and Wildlife Service has now made it a lot easier to designate critical habitat to be protected. The disturbing thing is that critical habitat is not based on true science. They not only look at restricting land use where a species lives now, but where it might live. There used to be rule that if the economic analysis of a listing was too high, there was an exclusion. Now, even the economic analysis is considered “discretionary.”

“We are at a critical time,” Budd-Falen noted. “It will be very important to let the new Administration hear our concerns and know our strong convictions.”

The Montana Farm Bureau Convention continues Tuesday, November 15, with the Resolutions Session where policy submitted by country Farm Bureaus is voted on as to whether it becomes 2017 Montana Farm Bureau Policy. Former Cargill CEO Greg Page is slated as Tuesday’s luncheon speaker. The convention wraps up Wednesday, Nov 16.

Producer profit is the Focus of Goshen County Beef Convention