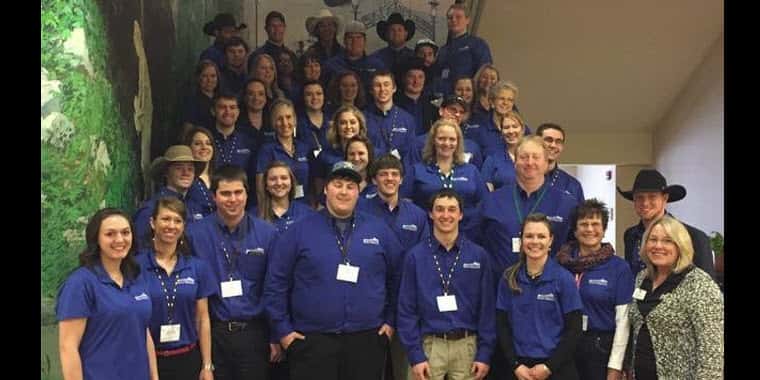 Despite a snowy time in Nashville that felt more like Montana than the South, Farm Bureau members had great experiences during the FUSION Conference February 13-16 in Nashville.  The conference, which served as a combined meeting of state Farm Bureau Women’s Leadership Committees and state Promotion and Education Committees as well as Young Farmers and Ranchers, offered both leadership as well as technical training.

This was the first AFBF Conference that Justine Kougl had attended, and she was thrilled. “The top benefit to this event was networking. It was great being able to meet many other people,” said Kougl, who ranches with her husband in Kirby.  Kougl and her husband, William, attended different workshops.  “William attended the workshops dealing with production agriculture since we have cattle, and I went to the communications workshops.  We have a blog and a Facebook page for our ranch and I find communications with the public very important.”

Kougl was pleased to see many collegiate Farm Bureau members, both from Montana State University and UM-Western, along with many other schools, at the workshops. “There are many college kids interested in blogging and working on different social media sites promoting agriculture and talking about their farms and ranches. It’s good to know they are going to continue communicating with the public.”

“Our general session speakers were great and Dr. Dale Henry was amazing,” said Kougl. “He gave a speech on not passing the buck. Even if it’s not your job, if something needs to be handled, do it. You can’t walk by a sick calf and say ‘My brother’s in charge of that.’ You help that calf. We have so many responsibilities, and if you take care of everything, things really will run more smoothly.”

The rancher explained that meeting other young people involved in the diverse array of agriculture was fascinating. “I never thought I’d meet a peanut farmer, or people growing cotton and tobacco or someone raising angora goats and rabbits. You know it’s out there and thanks to Farm Bureau, we had the opportunity to meet those farmers firsthand.”

This was the first conference for Neil Schott who is a junior at MSU studying agricultural relations. Schott grew up in Stanford, and has an appreciation for agriculture having grown up in a rural area and working on ranches during the summer. “The keynote speakers and sessions were all incredible. There is so much you learn here that you  can take back and use on your farm or ranch,” he said. “One workshop I found very interesting was passing on land to the next generation.  The advice was to think about it, talk about it, work out a contract and get it done before it’s too late.”

In addition, Schott said the commodity outlook proved interesting, but no big surprises. “He said cattle prices will plateau although still be above the $2 mark.  He didn’t elaborate too much on wheat, but did say prices will probably remain about the same based on our exports to China and the fact there is a 35 percent carryover in wheat from last year so because there is this surplus prices won’t change much from today’s prices.”

Schott, who serves as treasurer for MSU Collegiate Farm Bureau, agrees with Kougl that the great part of the conference is meeting other young people with a strong interest in agriculture. “I had a great visit with a Colorado wheat farmer who told me about his use of no-till farming and all the benefits. “

Skylar Shirley is a freshman at UM-Western studying communications and comes from a family who ranches in Cut Bank, and she lives in Conrad. “I was very involved in 4-H and FFA, although it wasn’t until we bought our ranch when I was in the 8th grade that I began to realize the importance of advocating for agriculture,” she said.

Shirley, who is the president of the UM-Western Collegiate Farm Bureau, says the conference taught her that there are many networking opportunities, and it’s important to join forces with others involved in agriculture.

“One of the workshops I attended was all about developing your networking skills, “said Shirley. “For many college students attending this conference, it was our first chance to develop new relationships. I went to the blogging workshop that demonstrated why it’s so important now to be involved with social media and commit to teach people the importance of our industry. It’s essential to develop strong connections our communities and in Farm Bureau.”

Gretchen Schubert attended as state chair of Montana Farm Bureau’s Women’s Leadership Committee (WLC). “The conference offered outstanding workshops and had excellent motivational speakers. I always get so much out of the workshops that encourage leaders to stand up and be heard,” said Schubert. I attended the Farmland Legacy workshop on estate planning that took that subject to another level. He went through the steps of positioning your place and turning it over to the next generation.”

The Huntley rancher thought the group lunches that brought all of the attendees together were great. “There were about 1400 of us. It was wonderful to visit with all those amazing young people who are the future of farming and ranching.”

Deadline to Reallocate Base Acres and Update Payment Yields is Feb. 27