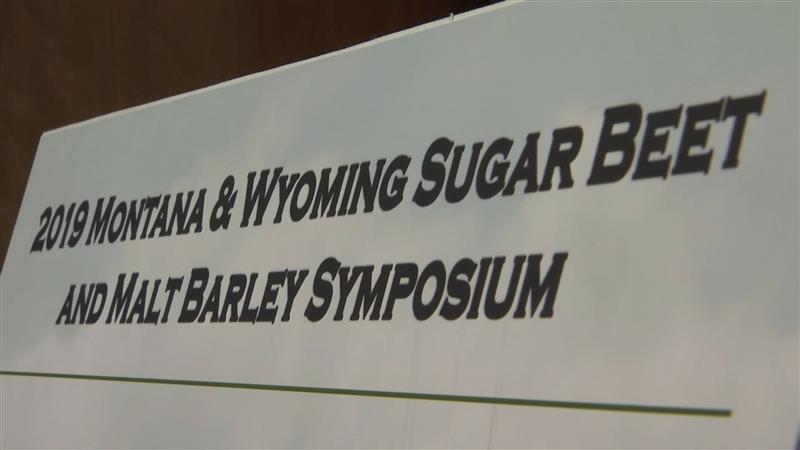 BILLINGS- Malt barley and sugar beets are two important crops to Montana and Wyoming farmers and the regional economy. This week, both crops were in the spotlight during a symposium hosted by the Mountain States Crop Education Association in Billings.

A lot has changed in the 21st century of how both crops are raised versus how our grand and even great grandparents farmed. That’s why organizers of the Montana and Wyoming Malt Barley and Sugar Beet Symposium like Neal Fehringer put so much time in providing relevant topics.

“You know we’re looking at no-till farming in sugar beets when people thought that was not a possibility, that you had to plow the ground make it smooth and like a table top in order to plant those sugar beets. And that’s not true,” said Fehringer. “So, there’s opportunities to reverse our degradation of the soil and make it healthier.”

Farmers like Kim Nile of Forsyth appreciate the symposium’s information that’s geared towards making them better farmers and staying in business.

“We’re not as isolated as we used to be with the internet and all that stuff now,” said Nile. “But still, it’s good to get it firsthand, and you can you can rub shoulders with it with the people doing the research and pick their brain one on one in addition to the formal presentation. So, it’s just a good forum to get the information out.”

“They spend a lot less time in the tractor wearing out their tractors using up diesel fuel and it improves the soil health,” said Fehringer. “So, maybe we’re not generating any more gross revenue, but if we can cut our costs, then the net is better.  So, that’s what they’re embracing is ways to survive.”

At the end of the day, Nile says the symposium passes along useful information that supports their way of life.

For over 25 years, the Montana and Wyoming Malt Barley and Sugar Beet Symposium has been an important education tool for growers. Day 1 has has been focused on malt barley and day 2 on sugar beets. This year's keynote speaker on day 1 was Buzz Mattelin, the National Barley Association's vice president from Culberston, MT. And Day 2's keynote speaker was Luther Markwart, the American Sugar Beet Growers Association's executive vice president.

It’s symposiums like this where malt barley and sugar beet growers from across the entire region can come together and hear about the latest issues that are impacting their industry and learn about some of that new and exciting technology that hopefully will allow them to become more profitable and stay in business.