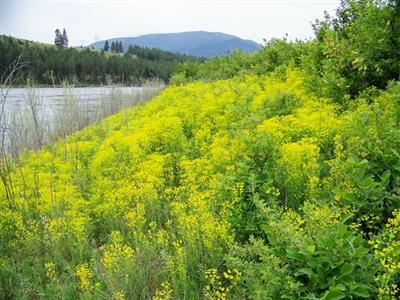 The term ‘weed’ can be broadly applied to any plant that is undesirable at any given time and place based on certain criteria. It is important to understand that the word ‘weed’ has become a general term with no universal definition, and many plants are considered to be weeds, depending on location. For example, corn plant in a soybean field is considered a weed although both plants are major field crops. This becomes problematic especially in pasture management because producers can be misled regarding what is considered a weed or not and what the control measures may be.

In 2019, South Dakota endured one of the wettest years on record. These conditions caused some fields to not be planted and had no weed control measures accomplished all season. This gave way to some prevent plant fields to be over taken by various types of weeds, such as Waterhemp, Kochia, Marestail and other annuals. As a result, producers need to plan in advance on how to deal with these fields that contain an overabundance of weeds. Weeds in these bare fields have deposited significant amount of seeds on the soil surface, which can easily germinate when adequate moisture and temperature are available. Managing the weed seed bank involves managing weed seed production and germination. Producers need to limit the production of weed seeds. This will in turn limit opportunity for weed seed germination in the field.

Tillage often is performed as an option to destroy all visible weed growth, but at the same time burying or planting weed seeds that may cause issues, not only in the current growing season but also in the future. Any disturbance of the soil surface may initiate weed seed germination. No-till fields give ample opportunity to control weeds through fall application of residual herbicides or a spring burn-down. In a properly managed no-till field weed seeds stay on or near the ground surface and are open to predation and decay. Also, keeping weed seeds near the surface of the ground increases the effectiveness of soil applied herbicides.

How to Manage Weedy Fields in 2020

It can be an effective option to consider planting those fields last that had high weed density in 2019. This will give more opportunity to control early emerging weeds with burn-down and pre-emergent herbicides. Making sure of proper control of these early weeds before planting is extremely critical. Use a multi-step approach to weed control through the use of pre-emergent herbicides with overlapping residuals, with a tank mix of herbicides with multiple sites of action. If possible use an herbicide with separate sites of action for the post-emergent application. Under lower weed pressure situations, one herbicide site of action may be sufficient all growing season. Cover crops in-between cash crops or on prevent plant ground could also help suppress weeds, decrease an overabundance of water and give a healthy soil structure to plant later in the spring. Always scout fields before and after application of herbicides to determine what herbicide to use and if there will be a need for additional control measures.

As we look forward to the next growing season, it is very likely that there will be fields or areas within fields that will be inaccessible to field equipment. There are some burn-down herbicides that may be used by aerial application to help suppress weeds in those fields. Information on aerial application can be found on the herbicide label.

Clipping weeds with a mower at the early stages of flowering can suppress weeds and stop weed seed production. Repeat clipping may be necessary throughout the growing season. Cutting the weeds down by hand using a machete can be a precise way to spot control noxious weeds.

Prescribed fire can bring many benefits to the grassland ecosystem by reducing unwanted species on the landscape. Further it gives new opportunities to desirable species of native grass and broadleaf species that increase the nutrient dense feed sources for livestock.

Insects are able to suppress and control certain noxious weeds in the state, such as Russian knapweed, leafy spurge and Canada thistle. Biocontrol introduces natural predators to prey on the unwanted plants.

It is commonly perceived that cattle, sheep and goats prefer primarily grass species and that only grass should dominate the pasture, leading to a conclusion that if a plant is not a grass, it is a weed and has no value to livestock production. This simplified approach can result in a broad-scale application of herbicides to control broadleaf plants in pastures. Producers should consult a variety of resources in order to assess whether a plant is truly a weed or whether it has some intrinsic value to the system or to livestock diets.

Kathy Voth is a leading expert in an emerging science of managing weeds with livestock. In her book Cows Eat Weeds, Voth (2010) outlines simple methods that any producer can implement to train cattle to eat a variety of weed species, including many exotic species found on the South Dakota noxious weed list. With her simple techniques, she describes how one can train cattle to forage a variety of weeds previously thought to be non-palatable. By utilizing grazing as a means of weed control, producers have the potential to decrease input expenses while reaping the benefits of inexpensive weed control through animal nutrition.

Information on the palatability of individual species can be difficult to find and may often be contradictory. Location, time of year and time of day can influence a plant’s relative nutritional (or toxic) value. The relationship between toxins and nutrients in ruminant animals is complex, and in many cases livestock can successfully mix their own diets as long as enough variety is available (Kathy Voth pers.com). For a list of species that have been found palatable and good for cattle please view the Cows Eat Weeds article.