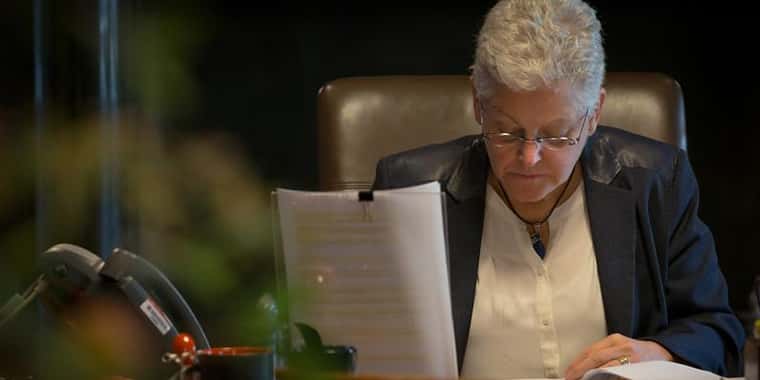 EPA Administrator Gina McCarthy is talking with farmers and agribusinesses in the Midwest this week.

OMAHA (DTN) — If nothing else, EPA Administrator Gina McCarthy hopes a trip to Missouri this week to talk to farmers and agribusiness representatives will help to dispel what she said are “myths” about the agency's proposed Clean Water Act rule.

During a conference call with reporters Tuesday ahead of a farm tour in the Columbia, Mo., area Wednesday and a speech before the Agricultural Business Council of Kansas City Thursday, McCarthy wasted little time tackling claims made by agriculture interest groups and others about the proposed rule.

“Unfortunately there is a growing list of misunderstandings going around and we're trying to clarify the issues,” she said. “Hopefully it is an opportunity to set the record straight. This is not about restricting farmers, but protecting waters downstream. While there are legitimate concerns, we're hearing some concerns that, to put frankly, are ludicrous.”

McCarthy said the notion that EPA is regulating small unconnected waters such as puddles is “just silly.”

“It's about protecting small waters that can affect downstream water quality,” she said. “For the first time we're making clear that we aren't regulating all ditches.” She added EPA is not regulating groundwater.

Of a claim going around that farmers will need permits if their cattle are crossing streams: “Well, that's ludicrous.”

The proposed rule, which stems from court rulings over the last decade, is open for public comment until Oct. 21.

EPA added a list of 56 exempt conservation practices to the proposed rule to make clear what is considered to be “normal” farming practices.

“Let me be clear, those practices are normal practices that don't require permits,” McCarthy said. “If you don't need a permit now you won't need one. Getting this right is important. That's why it's not about focusing on myths, but it's about getting it right for all of us. I'm hoping we can ditch the myths. We're completely committed to make any change in this rule. We've already heard some legitimate concerns and we'll address those.”

What's most important is the rule is a reflection of recent U.S. Supreme Court rulings that “tell us we need to have more science-based processes,” McCarthy said.

“We know enough now that we can propose this rule,” she said about how small streams are connected to navigable waters. “We had to make sure we had to refine a rule based on science moving forward. I think the anxiety has risen around those waters. We know what's in (it), but the question is how can we make it clear to everybody. We're not overreaching here. We're not expanding our jurisdiction.”

One concern raised by various agriculture groups about the exempt conservation practices, is whether those practices would have to conform to USDA Natural Resource Conservation Service rules. Ag groups are concerned EPA would be in effect giving authority to NRCS to enforce the act.

On Monday, the National Milk Producers Federation said in public comments to EPA are concerned the CWA rule would affect their relationship with NRCS.

The interpretive rule issued in March says producers are exempt from the CWA permits for the listed conservation practices “if they comply with detailed NRCS technical conservation standards,” NMPF said in its comments. “Until now, these standards have been voluntary, and the farming practices exempt from the permit process,” the group said in a news release.

The group said the guidance changes NRCS's role from “that of a conservation partner to an enforcer of the Clean Water Act on EPA's behalf.”

In its comments, NMPF used harvesting hay as an example. In the interpretive rule farmers harvesting hay may be exempt “only if they follow NRCS Conservation Practice Standard No. 511: four pages of criteria covering timing of the harvest, moisture content of the hay, length of the cut hay, stubble height and much more,” NMPF said.

The group said many farmers harvest hay without following NRCS standards, bringing into question whether those farmers would be exempt.

McCarthy said the NRCS issue is one of those “legitimate concerns” the agency needs to address in the final rule.

“If you look at this rule, every exemption in the prior rule remains here,” she said. “The interpretative rule is a way to provide additional clarity and certainty that there is a subset of practices and conservation efforts that have great water protection value. We wanted to make absolutely certain they are OK in the act. It doesn't mean we are narrowing exemptions, it just provides clarity. I don't think anyone in the farming community would disagree with the intent, and that is one of the myths we need to knock down.”

One purpose for traveling to Missouri, McCarthy said, is to make sure the voices of those farmers and ranchers who support EPA's efforts aren't “drowned out.” She said the agency has received little-publicized positive feedback on the rule from farmers and ranchers.

“I think the ag community and EPA don't disagree on water protection,” McCarthy said. “We need to roll up our sleeves. We're really trying to protect the ability of agriculture to continue their farm practices.”

Get Ready to Talk Bison!