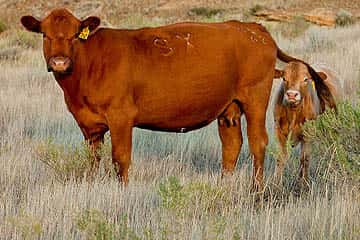 How to address the nutritional needs of a cow herd after calving is critically important to have a successful start to next year’s calf crop. To maintain a 365-day calving interval then re-breeding has to occur 82 days after calving. The cows needs to recover from calving and start cycling again during that time period while at the same time providing enough milk for her growing calf.

All of those demands impose a significantly higher nutrient requirement on cows after calving. Depending on her potential for milk production, a cow could require as much as 40 to 50 percent more energy and protein compared to the two months ahead of calving. Her needs for nutrients such as Vitamin A, calcium and phosphorus are much greater as well.

A major obstacle in meeting her needs during early lactation is the biological priority for nutrients. The first priority for any animal is to meet their maintenance needs first. The next priority in the case of 2- and 3-year old cows would be their requirements for growth. Providing milk for her calf is the third priority, and finally, if her nutrient intake is high enough she’ll reproduce. All four priorities need to be satisfied or there will be no calf to sell next year.

Another factor to keep in mind is weather conditions. As we move closer to spring, cold stress due to the absolute air temperature becomes less of a concern. However, spring moisture can create its own challenges. A haircoat that is completely soaked loses all of its insulation value. Under those conditions the energy requirements would increase by an additional 2 percent for every degree that the wind chill temperatures drop below 59⁰ F. Furthermore, as little as 2 inches of mud can increase the maintenance requirements of beef cattle by 10 percent.

So how do ranchers meet the needs of cows in the most cost effective manner? The answer depends somewhat on when calving season begins. If the start of calving season is timed so that peak grass production coincides with when cows are in early lactation, the forage resources might very well be sufficient to meet her needs without relying very heavily on harvested feedstuffs. That savings in feed is one of the greatest advantages for delaying the start of calving to match up with the grass production in a given environment.

If a ranch’s system involves calving earlier in the year, then the nutritional plan needs to take into account the cow’s higher requirements during early lactation. Ideally the feedstuffs have been tested to that the highest quality forages are saved for this time frame and then the proper supplements provided if needed.

Also keep in mind that because of the way that nutrients are partitioned by the cow, it is very difficult to feed a cow enough to increase body condition after calving. The typical response by the cow when more energy is fed is to increase milk production first before adding body reserves. That’s one of the reasons behind the standard recommendation to feed cows or heifers so that they are in a body condition score of 5 or 6 by calving time.

West Blast Preventable, Others at Risk