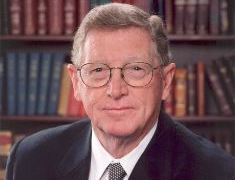 The founder of Northern Broadcasting System, and three-time U.S. Senator, Conrad Burns would have laughed at this map below, but henceforth the former Airport Road in Billings, from Main Street in Billings Heights to the 27th Street roundabout at the Airport, will be known as the Conrad Burns Memorial Highway.

On Thursday, April 13th, Montana Governor Steve Bullock signed SB231 to designate the road in memory of one of Billings, Montana’s most famous leaders. Yellowstone County Commissioners requested the change from the Montana Department of Transportation. Since such a request must be approved by the State Legislature, Senator Roger Webb whose Senate District 23 contains the designated highway, sponsored SB231, and Representative Dale Mortenson, carried the bill in the House.

Renaming Airport Road in the Senator's honor is especially fitting, said Yellowstone County Commissioner Denis Pitman, since Burns helped secure funding for the revamping of the broad modern thoroughfare from the narrow two-lane road it once was.  A long-time resident of Billings Heights, Senator Burns was also very much involved in the development of MetraPark which is located just below the road's intersection with Main Street.

Following a career in livestock marketing, and his creation of the Northern Ag Network in 1975, Conrad Burns served two years as a Yellowstone County Commissioner from 1986-88, and three terms in the United States Senate from 1988-2006.

In recent years Conrad Burns was inducted into both the Montana Broadcasters Association Hall of Fame and the National Association of Farm Broadcasting Hall of Fame.  He and his wife Phyllis retired to their home in Billings Heights, where he resided until his death last April 28, 2016 at the age of 81.