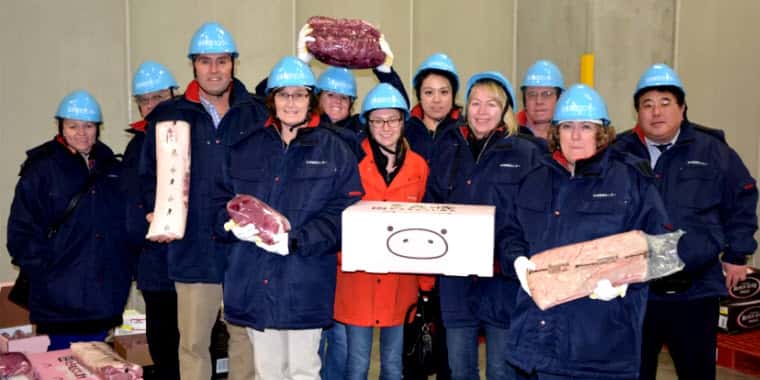 The tour started with an overview of USMEF’s marketing objectives in China and an explanation of several market access issues that impact U.S. meat exports into the region. This was followed by a briefing from the U.S. Agricultural Trade Office in Shanghai, which focused on the business climate in China for U.S. agricultural products and detailed the U.S. government’s efforts to expand trade between the two countries.

Chaley Haney with the Montana Beef Council provided the following update to Northern Ag Network while overseas on the marketing tour.
The group then received a presentation from Yiguo.com, a food distribution company that has emerged as one of the region’s leaders in e-commerce. Yiguo became the first company to sell food online in China in 2005, and its first online meat sales came in 2009. Today, the company offers self-operated food delivery in five of China’s major metropolitan areas and serves customers through third-party delivery companies in 48 additional cities. Yiguo’s business is expanding rapidly, especially through purchases made on smart phones. Eric Li, vice president of supply and alliance, noted that mobile purchases placed with Yiguo increased 30 percent last year, surpassing purchases made from a personal computer for the first time.

The USMEF Market Expo delegation tours the meat department of an RT Mart store in Shanghai
“E-commerce has just exploded in China and it’s only going to get bigger,” said Dean Meyer of Rock Rapids, Iowa, a producer of corn, soybeans, cattle and hogs who serves on the Iowa Corn Growers Association board of directors. “This can expedite movement of more U.S. meat into China because the companies engaged in e-commerce appreciate the quality and consistency of U.S. products. We already see these opportunities on the pork side, and there’s strong demand for U.S. beef if we can only gain access to the market.”

Retail visits were next on the delegation’s agenda, as they had an opportunity to view merchandising trends in two distinct supermarket settings. At Citysuper, shoppers are attracted to the store’s personal service, culinary classes and selection of specialty products. The group received a detailed tour of the Citysuper meat department and observed a U.S. pork tasting demonstration.

The USMEF team also had an opportunity to meet with pork importers, including Shanghai Jin Hai Food Co., one of China’s largest processors of cured pork. Shanghai Zhengpu Trade Co., a pork distributor and industry leader in online merchandising, also provided the group with a company overview and a tour of its Dean Meyer of the Iowa Corn Growers Association samples U.S. pork at a Citysuper tasting demonstration in Shanghai.  “I was very impressed with how innovative these businesses are, and the strategies they’ve developed to expand their sales,” said Karen Grant of Meadow Grove, Nebraska, who serves on the board of directors of the Nebraska Pork Producers Association. “For example, the efforts they make to attract and retain quality workers and their investment in developing new products were very interesting to me, and I’m hopeful that this leads to new opportunities for U.S. pork.”

On Wednesday, March 4, the Market Expo delegation moved on to Tokyo, where similar industry visits are planned. The group also spent a day at FoodEx, Asia’s largest food exhibition. USMEF will report on the Tokyo segment of the Market Expo later this week.

National Pork Board Reports Solid Consumer Demand for Pork in 2014