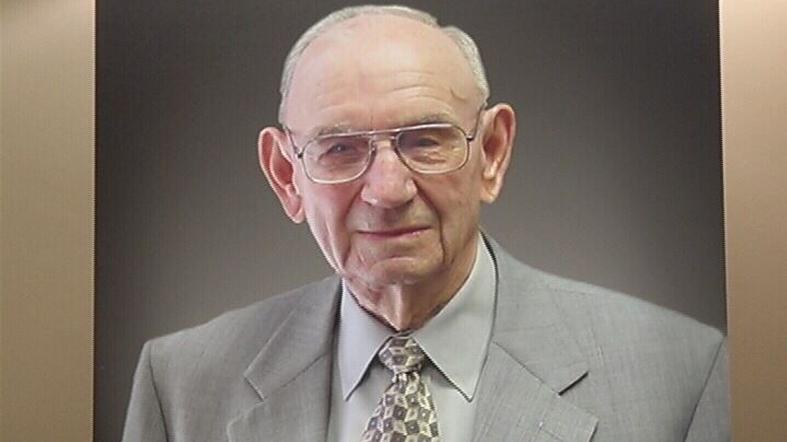 Billings, MT- Paul Metzger was born in Laurel, Montana, on June 29,  1916, to Louis and Nora Metzger, who homesteaded on land south of the Yellowstone River between Billings and Laurel. Paul attended school through the eighth grade, at which time his formal education gave way to learning the ways of farming in a sometimes extremely unfriendly and unforgivin g environment. He continued to take his sister Grace –who he referred to only as “Sis”– to school every morning before retuqiing to the farm to help his dad. Grace was the only member of the family to receive a high school diploma. Located off Duck Creek, Metzger Road stands as a memorial to the pioneering  spirit of the early settlers. The Metzger family never experienced electricity at the original home, and it wasn't until the early 1950's, when Paul bought an adjoining farm and moved there, that he enjoyed such luxury.  Hauling water to the home was a daily childhood responsibility of the Metzger children. Typical of his generation, Paul lived simply and enjoyed few extravagances .

Paul was a student of modern farming, and like his father before him, Paul was not afraid to experiment with different crops, but wheat farming was his mainstay . Their 1947 wheat crop was the largest single purchase and sale of wheat ever made in Laurel by the Hageman Elevator at the time of its sale. Paul eventually purchased and greatly expanded the family operation, finally selling it in the mid-70s when he retired.  Paul's wife Marie preceded him in death in 1992.

Paul was a walking historian , and if something happened locally between  1920 and 2013, he was able to recall amazing details of the area history . From the flood of 1937 that ravaged downtown Billings to the fire of the original Northern Hotel as well as more mundane events, Paul was able to provide detail and dates. He also was aware of the scandals and gossip of a much younger Billings and would add his narrative and opinion when pressed . While celebrating his 95th birthday , he was asked if he knew anyone that served in the Civil War, and he was able to recall two individuals who had served.

Paul was an astute investor all his life and looked forward to investing a portion of each year 's profit into publicly traded companies on the stock exchange. His business acumen was legendary at DA Davidson, where he was a member of their office family from the first week the office opened in 1972. Always the gentlemen, Paul dressed immaculately in a suit, tie and hat for his daily visit to the office. One of his most endearing traits was the sly smile and the way his eyes twinkled and tongue bounced in his mouth when he made a comment, displaying his dry sense of humor. Paul was a man of class, dignity and humble charm. He will be missed by all who had the privilege of knowing him.

Paul passed away in May of this year and his entire estate valued at $38 million will be split equally between Billings Clinic and St. Vincent Healthcare.  This transformational  gift represents his commitment to the well-being of our community and the faith he had in those directing our health care.  The gift is the largest, bne-time gift ever received by each of the organizations . It was Paul's hope that it will serve as both a blessing to the community and a challenge to others to be benevolent and return a portion of what this wonderful place he called home has given to all of us.