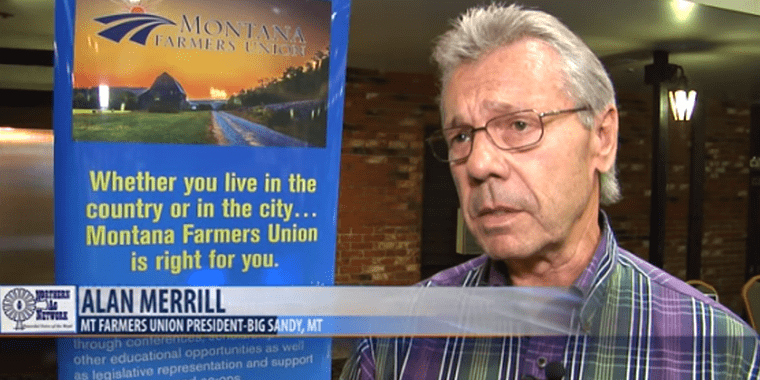 GREAT FALLS, MT (Oct. 23, 2015) – The Montana Farmers Union (MFU) annual convention is underway in Great Falls. Members from the state are convening to celebrate the 100 year anniversary of MFU.

Alan Merrill is the President of MFU and talked with the Northern Ag Network’s Russell Nemetz about the importance of young people in their organization and programs they have to encourage young men and women to get involved.

Convention attendees were treated to an Agricultural Film Festival featuring the film Ridin’ for the Brand; the documentary Great American Wheat Harvest; and the film Terra Firma.

Terra Firma is about three women military veterans and their experience with PTSD after returning home form the Middle East and how Agriculture has helped them cope and overcome the challenges that PTSD brings so many military veterans.

The Farmer Veteran Coalition is mobilizing veterans to help feed America. It’s mission is cultivate a new generation of farmers and food leaders, and develop viable employment and meaningful careers through the collaboration of the farming and military communities. It believes that veterans possess the unique skills and character needed to strengthen rural communities and create sustainable food systems. The Farmer Veteran Coalition also believes that agriculture offers purpose, opportunity, and physical and psychological benefits.

To learn more about the Farmer Veteran Coalition, visit www.farmvetco.org.

Since 2001 over 280,000 women have been sent to the Middle East to serve in the War on Terror.  Often traumatized by their experiences, many return home with PTSD, unable to cope with the daily rigors of life.  Terra Firma weaves together the stories of three women veterans who were among the first to deploy, serving in Afghanistan, Kuwait and Iraq.

After years of struggling, each has found ways to heal the hidden wounds of war through farming.   The film follows the women as they go about their daily lives, reflecting on their time spent in the military, the impact of war on their lives and their newfound peace of mind, finding that farming gives them purpose and a new way to serve their country by growing food for their communities.

Here’s the trailer for Terra Firma: A film about Women, War and Healing.

Time for Ag Groups to Stand Up for U.S. Cattle Producers