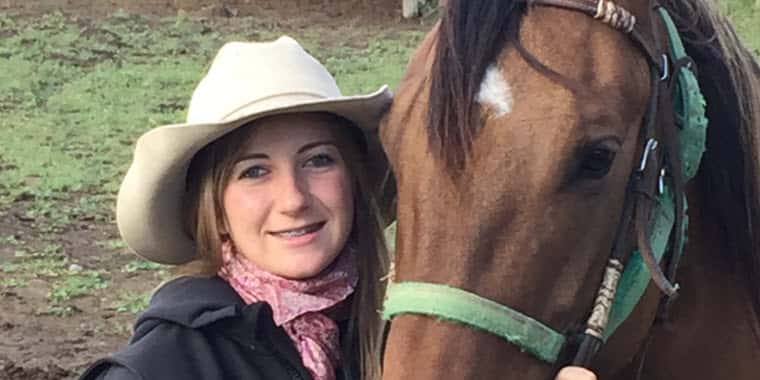 Jesse was raised east of Sunburst, MT, graduating from North Toole County High School in 2008. Being raised in the barn helping with her family’s cattle and sheep, the love of the ranching lifestyle runs deep. She followed her passion for agriculture, and graduated from Montana State University in 2012 with a Bachelor’s Degree in Animal Science – focusing on Livestock Management and Industry. She now resides near Whitlash, MT in the Sweetgrass Hills, near where she grew up. She has her own small commercial herd of Black Angus cows that keep her busy and she is also actively involved in her parents farming and ranching operations. Having spent 10 years in 4-H, she volunteers to help the local 4-Hers with their animal projects and was recently elected to the Marias River Livestock Association Board of Directors.

[EasyDNNGallery|3307|Width|350|Height|350|position|right|resizecrop|False|lightbox|False|title|False|description|False|redirection|False|LinkText||]“I feel blessed and honored to have been chosen to help lead the oldest agricultural organization in the state. In the small amount of time that I have held this position, I have never felt more welcomed by anyone than this organization welcomed me during their Annual Convention. They treated me like family and gave me the confidence I needed to step into this position. I had an absolute blast at the convention in Billings, meeting many new faces along the way. All I can say is, “Wow, what a great group of people!” I am looking forward to working with some of the most progressive and dedicated sheep producers in the state of Montana. Brent Roeder (outgoing Executive Secretary) has been so helpful in “showing me the ropes” as tasks within the organization are turned over to me. Rest assured, he will be on my speed dial for the next several months as I become more familiar with the organization and its membership. Thank you, Brent.”

[EasyDNNGallery|3309|Width|350|Height|350|position|left|resizecrop|False|lightbox|False|title|False|description|False|redirection|False|LinkText||]Wallewein is taking over the position from Brent Roeder, of Fort Shaw, as he steps into his new role as Teton County Ag Extension Agent. Jim Brown, Policy Director for MWGA, remarked, “It has been an absolute pleasure working closely with Brent on matters related to the Association since the time of his hire.  Brent has a long history and deep experience in the agriculture field and that experience and knowledge worked to the benefit of Montana’s sheep industry.  During his time as Executive Secretary, Brent has greatly improved the working relationship with the MWGA and its membership. He has provided a face for the Association that the membership saw during both the time of the State convention and at the time of shearing.  Under Brent’s watch, the Miles City Ram Sale has also reached a high place of prominence within the Industry, and the wool lab’s financial circumstances have been stabilized.  I am pleased that Brent has landed a job that will allow him to spend more time at home and with his family, but it’s difficult to say goodbye who has the left Association in a much better place than when he found it.”

Roeder took the position in January 2012 and has since then, worked endlessly for the sheep and wool producers in Montana and in the organization. The MWGA would like to thank Brent for his time spent with the Association but knows that this is not a “Good-Bye”, but rather a “See You Soon”.

The Montana Wool Growers Association was established in 1883, making it the oldest agricultural organization in the state. MWGA works to preserve and promote the sheep and wool industry in the state of Montana and nation-wide. To learn more about the Wool Growers or their membership, please contact Jesse Wallewein, Executive Secretary, at (406) 450-3429 or visit www.mtsheep.org for more information.