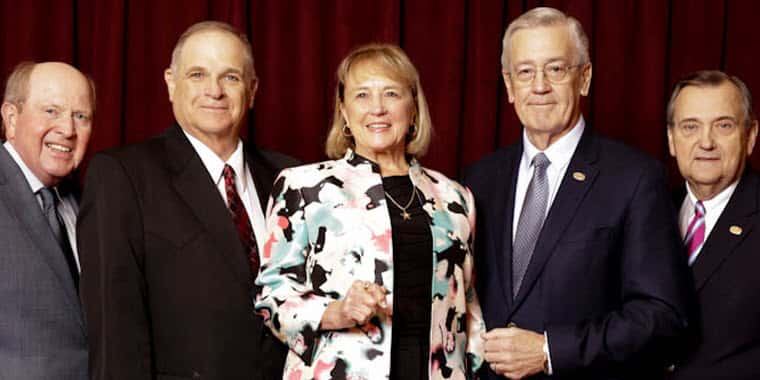 Though AQHA operates primarily upon the decisions of its members through the board of directors, the five-person executive committee is responsible for implementing these important decisions and governing AQHA between the annual meetings of the membership and the board.

The AQHA Executive Committee – consisting of a president, first vice president, second vice president and two additional members – is elected each year by the board at the AQHA Convention. Each member serves a term of one year until the selection of his/her successor. The executive committee convenes bimonthly at AQHA International Headquarters in Amarillo to conduct business and consider all disciplinary matters.

Among this year's elected members is Stan Weaver of Weaver Quarter Horses in Big Sandy, Montana.

Stan Weaver has been an AQHA director since 2011. He is currently on the Foundation council, and is a former member of the studbook and registration, public policy, Hall of Fame selection committees, marketing and ranching councils, and served as chairman of the ranching council. He was also instrumental in helping develop the AQHA Ranching Heritage Breeders Program.

Weaver has bred American Quarter Horses for more than 30 years and has registered more than 1,400 foals with AQHA during that time.

Weaver has owned and operated Weaver Cattle Co., a cattle and farming enterprise in North Central Montana for the past 40 years. Weaver also owns and operates Weaver Order Buying, a cattle brokerage firm.

He and Nancy raised three children on the ranch. All three children and families continue to work on the ranch, but have also expanded their own ranching and farming interests in the area. KellyAnne Terry is married to Casey Terry and they have two children, Wyatt and Avery, and live in Lewistown, Montana; David Weaver who lives in Big Sandy, has one daughter, Hailey; and Daniel Weaver also lives in Big Sandy.

The Weavers received the 1997 Montana Quarter Horse Association Ranch of the Year award, and Weaver Cattle Co. was recognized as the 2014 Montana State University Family Business of the Year in the business category for operations in existence at least 50 years.

UW Professor Honored for Making Rangeland Science Available to All