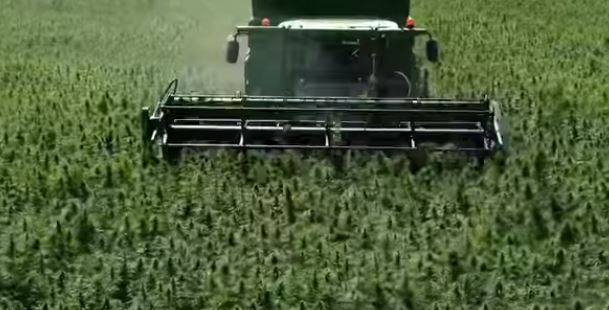 Industrial hemp has certainly become a hot topic in agriculture this year. Montana continues to lead the nation in hemp production, doubling down to increase from 22,000 last year to over 40,000 this year. North Dakota ranks number 7 nationally with 4,000 acres, while both South Dakota and Wyoming have opted to not allow production this year, holding off until USDA establishes their federal rules.

Most of the hemp being raised in the region is mostly going towards seed or CBD oil. But one of the more enticing aspects of hemp is that in addition to the grain, the fiber can be baled and sold as well. But getting it sold can be a bit of a struggle.

However, an interesting opportunity is developing to utilize hemp fibers here at home. Montana Farmers Union has partnered with Transformative Ecologies and Montana State University Engineering faculty to understand the feasibility of producing industrial hemp fibers for use in building materials.

It’s called Hempcrete and Transformative Ecologies founder Kirby Hancock says, “There is so much potential and possibility with hemp,” said Hancock. “It can help solve some of the many modern challenges faced today.  It is great to be collaborating with FUE and MSU to further its development and create impact that can improve both the environment and economy for current and future generations to come.”

Montana Farmers Union President Alan Merrill is is encouraged by the future of Hempcrete in the building industry. “If testing results show opportunity to return a profit, it could lead to much needed processing opportunities for our state, increasing demand for industrial hemp and the farmers and ranchers who raise it. The opportunity to offer Montana farmers an additional crop to produce for a new and growing market is of great importance to our farmers and our organization.”

The study will include decorticating (or husking) raw hemp stalks, mixing and prototyping Hempcrete samples, product performance testing and Hempcrete construction applications. “Now, it’s primarily an insulation replacement,” says Hancock. “The research that I’m working on is to do some more testing and development on it to be able to have a wider spread of applications.”

Establishing viable markets is critical for farmers and the future of this relatively new crop. Being able to market that hemp fiber is a challenge for many growers. Hancock says there just isn’t much capability to process the fiber in the U.S. “We’re working with Farmers Union to hopeful streamline some of that processing and get it established in Montana so that farmers have an outlet for their fiber.”

At this point, they are buying a small amount of hemp fiber from local producers but eventual they’re hoping to see that market expand and create an opportunity for processing facilities in Montana. “It’ll open up avenues for consumer demand because there’s definitely a lot more attention going to sustainable materials as well as indoor air quality, which hempcrete can help with,” Hancock says. “So farmers will have a place to take their crop and then have a place to process it, as well as setting up end markets for consumers.”

Hancock says they are early in the research process, just starting some of the testing now and hoping to get results in the spring. If all goes well, they may be headed to the commercial market in a year or two.

If you’re raising hemp or considering it for the future, you might think about attending the Montana Farmers Union Convention in Great Falls this Friday and Saturday where Kirby will talk with producers about the future of hempcrete.