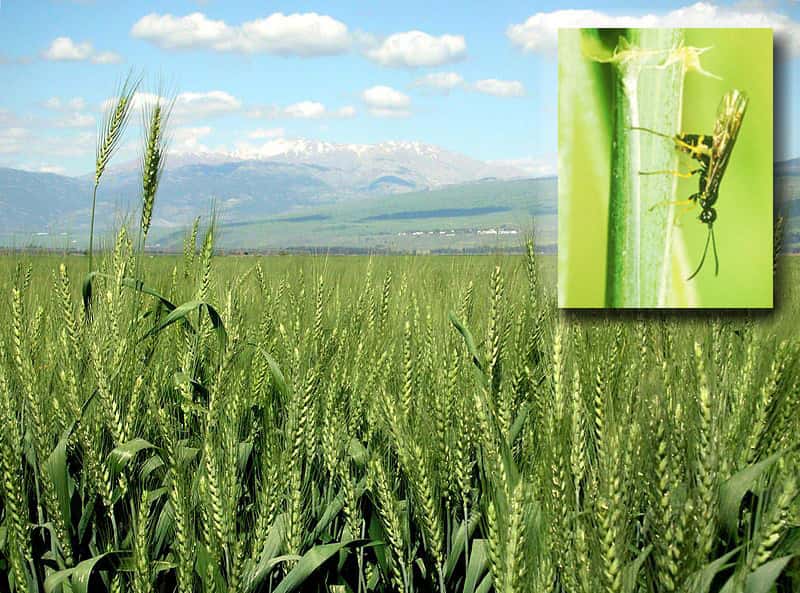 BOZEMAN – Research conducted at one of Montana State University’s agricultural research centers was patented in January after the discovery of a group of unique fungi that may lead to strides in combating wheat stem sawfly and Hessian fly, two of the most prominent wheat-targeting pests in the U.S.

Gadi V.P. Reddy, who was the superintendent of MSU’s Western Triangle Agricultural Research Center in Conrad and is now a research leader for the U.S. Department of Agriculture’s Southern Insect Management Research Unit in Mississippi, helped to isolate novel strains of five fungi from samples in Montana wheat fields. The fungi — Beauveria pseudobassiana, B. amorpha, B. bassiana, Metarhizium pemphigi and M. anisopliae — occur naturally in certain wheat plants and are lethal to both wheat stem sawflies and Hessian flies.

Wheat stem sawfly and Hessian fly cause millions of dollars in damage to wheat crops throughout Montana and the Rocky Mountain region each year, said Reddy. They pose a particularly challenging threat because they can’t be combated by spray pesticides. Sawfly lay their eggs inside wheat stems, so the plant provides protection to the very pest that ultimately kills it. Once the egg hatches, the larvae eat the inside of the stem and burrow downward for winter hibernation, which weakens the stem and causes lodging.

“We don’t have any reliable control methods for sawfly right now,” said Reddy. “Even if you spray chemicals, it doesn’t go inside the plant and kill the larvae. The flies have few natural enemies, and those are established and effective in only a few places.”

The patent, entitled “Compositions and Methods to Reduce the Population of Wheat-Stem Swafly and Hessian Fly,” was issued to MSU and the USDA Jan. 14 after a research and field-testing process that began in 2013. The patent will facilitate the production of commercial products that growers can apply to fields in an effort to accomplish what many adaptive management efforts haven’t yet been able to.

The most effective management method for Hessian fly and wheat stem sawfly in recent years has been the development of solid-stemmed wheat varieties. MSU breeders have released nine solid-stemmed varieties since 1995, including 2013’s Warhorse, the leading variety in Montana that year, and 2019’s Bobcat.

However, said Reddy, solid-stemmed wheat often shows lower yield and lower protein content than traditional hollow-stemmed varieties, which can make it less attractive for farmers to plant. The advent of no-till agriculture has also benefited the pests, which hibernate in the stubble left behind after wheat is harvested, waiting until the next spring to emerge.

After the initial discovery of the fungi in 2013, Reddy’s team sent them to co-inventor Stefan Jaronski at USDA’s Northern Plains Agricultural Research Laboratory in Sidney, which frequently conducts research with the MSU College of Agriculture and Montana Agricultural Experiment Station. Once the fungi were isolated from the wheat samples and laboratory and field tests were completed, MSU and the USDA applied for the patent in 2017.

“We found out that based on the experimental results, these fungi were specific to sawfly and Hessian fly,” said Reddy. “When spores end up on the insects themselves, they can germinate and release enzymes and substances that are toxic to the flies but are safe to both human beings and the wheat plant itself.”

Through a licensing process with MSU’s Technology Transfer Office, agricultural companies will be able to manufacture sprays or other products containing the fungi and eventually make them available to farmers.