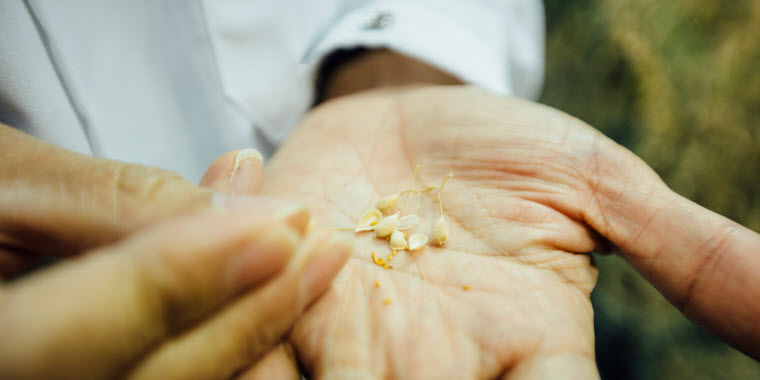 BOZEMAN — A research team led by faculty in Montana State University’s College of Agriculture received $5.1 million from the U.S. Department of Energy designed to explore camelina, an oilseed with the potential to be an alternative biofuel and multi-use crop.

The MSU team, led by Chaofu Lu, a professor in the Department of Plant Sciences and Plant Pathology, will work with collaborators nationwide in administering total funding of $11 million to take a systems-level approach to assessing camelina focusing on yield and nitrogen use efficiency.

Camelina is an oilseed crop similar to canola, though not commonly used for food oil. As with many major production crops, natural genetic differences among camelina plants could be used to breed novel strains of the crop, a process used at MSU to develop new varieties of cereals such as spring and winter wheat, durum and barley. Before that breeding activity can begin, more must be known about camelina itself, said Lu, who has studied the plant for the last 15 years.

“Our job is to find some preliminary resources and learn more about camelina as a potential crop,” said Lu. “This is a very large project that would be unthinkable to do by myself. That’s why it’s great to work with a team of my colleagues here at MSU and across the nation. All of these people are really good in their specific fields.”

The interdisciplinary team on the project, said Lu, will be critical in creating a comprehensive picture of camelina from the perspectives of genetics, production and microbiology. The MSU faculty on the team include plant physiologists, geneticists, agronomists, cropping systems specialists and bacteriologists specializing in plant-microbe interactions.

Lu’s team is one of seven groups nationwide to be funded by a $69 million Department of Energy program designed to explore novel feedstock crops and make them more productive and resilient in a variety of ecosystems nationwide.

“One key requirement for sustainable bioenergy production is feedstock crops that can be grown on marginal lands that are not traditionally suitable for growing food,” said Chris Fall, director of DOE’s Office of Science. “This research will help us understand the molecular mechanisms that lead to crops with greater productivity and survivability in stressful environments.”

For the next five years, the MSU-led team will conduct both field and laboratory studies of camelina as well as run computational models to learn more about the plant. Identifying baselines for yield and nitrogen use efficiency will provide a starting point for further exploration. Understanding the genetic markers within the plant will help researchers select for the most favorable results in the breeding process.

“We want to understand the genetic and physiological mechanisms behind yield and nitrogen efficiency, and how microbes in the soil can help the plants pick up nutrients,” said Lu. “Then, we can look at how these nutrients are mobilized and end up in a seed. More nutrients may mean a larger seed with higher oil content and higher yield.”

While yield is a fairly straightforward metric to track and maximize, nitrogen use efficiency is equally critical, said Lu. Nitrogen, a key ingredient in agricultural fertilizers, helps maximize plant growth. However, a plant will only absorb as much nitrogen as it needs, and excess nitrogen in the soil can have environmental and soil health impacts. Part of the camelina project will be seeking to identify just how much added nitrogen the crop needs so that it pulls as much as it can from the soil while leaving minimal excess behind.

“We know nitrogen is an important factor in the economics of a crop and also environmentally,” said Lu. “Nitrogen use efficiency is something that people have been studying for decades and it applies here as well.”

Lu said that camelina is particularly promising for the northwestern U.S. and the state of Montana and has the added potential to boost the productivity of rural economies. He said the hope is that the groundwork laid over the course of the project will lead to direct benefits to the agricultural industry in Montana and beyond.

How Were CFAP Funds Allocated in Montana?