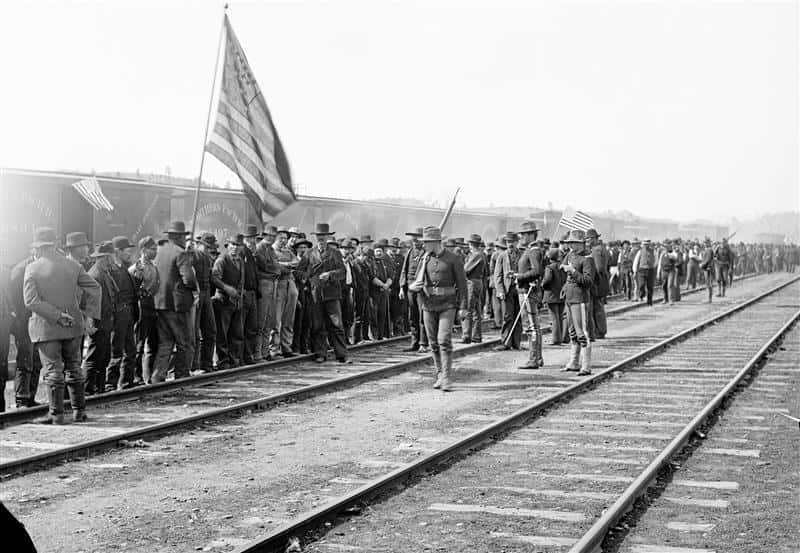 Montanans Have Long Battled for Economic and Political Rights

In 1894 a financially stricken and disgruntled group of Montanans that came to be known as Coxey’s Army commandeered a train in Butte and headed for Washington, D.C. to take their complaints directly to Congress and the president. Northern Pacific Superintendent J.D. Finn said at the time: “Where is the governor? Where is the United States Marshall? Where is the Montana militia? How in the hell do you expect one Irishman to stand off the whole of Coxey’s Army?” The train made it as far as Forsyth where federal troops from Fort Keogh two days later re-took the train where this photo was taken. Rumors of heavily armed and “dangerous men” had the whole nation on edge. But when searched, only three guns were found: one broken, one a .22, and the other an 1860s rifle with no ammunition. On the other hand 43 copies of the Bible also were confiscated. The photograph was taken by L.A. Huffman.

From David Walter, “Hogan’s Army: A Petition with Boots On,” in Montana Legacy: Essays on History, People, and Place

Though the authorities had the majority of Hogan’s Army in custody, popular support for the movement kept them out of jail.  Moving all of the men back to Helena, a trial was held where Hogan was given six months in Lewis & Clark County jail and several other ringleaders received 60 day sentences. The vast majority of Hogan’s Army were released after they took an oath to respect the property of the Northern Pacific.

The men of Hogan’s Army received a number of flatboats and provisions from the people of Montana to continue their journey.  They eventually made it to Washington, DC after meeting up with other Commonweals in St. Joseph, Missouri.  Historian David Walter offers this summation of Hogan’s Army: