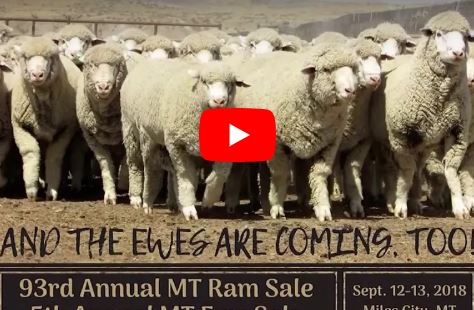 Head to Miles City for the 93rd Annual Montana Ram Sale and 5th Annual Montana Ewe sale. Events will be held on the Eastern Montana Fairgrounds on September 12th and 13th.

Then a picture showed up of the 1928 ram sale in Miles City. In researching that picture it was learned that 1928 was the third sale for the Eastern Montana Ram Sale. The picture of the rams was probably to show off the new barn as reported in the April 1928 Montana Wool Growers magazine.

Prior to the Montana Wool Growers had sponsored state ram sales around Montana and for a there were Grower sponsored sales each year in different parts of the state. The earliest of the “modern” Montana Wool Grower magazines started in 1928 (we have issues from the 1880s and 90s) and it reported that the 1928 sale would be the eleventh Montana Ram Sale.

12 AND EWES AVAILABLE FOR VIEWING