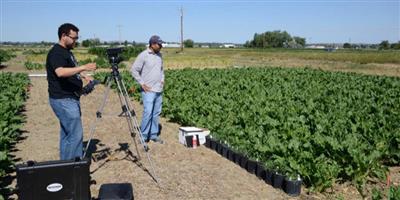 by Evelyn Boswell for the MSU News Service

BOZEMAN – A weed that drops “thousands and thousands” of seeds as it tumbles across northern Montana is a wily foe that steals water and nutrients from his winter wheat, according to fourth-generation farmer Todd Hansen of Gildford.

Not only does the weed, , ignore his property lines, but Hansen said it persists in his area of the Hi-Line because some of the plants have become resistant to the chemical that was most successful at killing it.

“When we find something that works, we really use it a lot,” Hansen said. “Kochia is a wonderful enemy because it keeps tweaking itself so we don't get ahead of it.”

Now, in response to calls for help from the Hi-Line, Montana State University has developed a new weapon in the battle against .

Available now for licensing, the technology will let users see which weeds are resistant to glyphosate — the active ingredient in the herbicide Roundup — and which are not. The ability to differentiate between the two types will allow farmers to target their spraying, said Prashant Jha, associate professor and weed scientist at MSU's Southern Agricultural Research Center in Huntley. He and Joe Shaw are lead developers of the technology. Shaw is director of MSU's Optical Technology Center (OpTeC) and a professor of electrical engineering in MSU’s College of Engineering.

Targeted spraying will keep excessive chemicals out of the environment and potentially save Montana farmers $1 billion a year, Jha said.

It costs $15 to $20 an acre to spray herbicides, and farmers spray at least three times a season, Jha explained. Ten Montana counties, most of them along the Hi-Line and totaling several thousand acres, have glyphosate-resistant . Jha added that farmers could reduce their herbicide costs 55 to 70 percent by spraying particular areas instead of entire fields.

Shaw said no one can tell which plants are resistant to glyphosate by walking through a wheat field. But the Optical Technology Center has more than 20 years of experience developing instruments that have capabilities far beyond those of the human eye.

So he and Jha, in an unusual collaboration between a weed scientist and electrical engineer, developed new technology after meeting with Hansen and other farmers along the Hi-Line.

The technology consists of a hyperspectral imager and computer processing. The hyperspectral imager — a commercial instrument developed by Resonon Inc., of Bozeman — records thousands of images across 240 bands of light and produces so many details that it detects subtle differences between plants in a crop field. The computer processes the information the imager collects, looking for significance and patterns.

Among other things, it can create maps that show farmers where to spray.

“It's exciting,” Shaw said. “We are really enjoying being able to work on problems of local significance. We don't always get that opportunity.”

The 2015 Montana Research and Economic Development Initiative funded $145,750 to the weed-crop imaging project, aimed at lowering the cost of production for Montana farmers. Selected projects were required to address a Montana problem, create Montana jobs in existing economic sectors or help spur new companies in Montana.

“This kind of money is making a big difference,” Shaw said. “It allows us to put our attention squarely on a Montana project. With national money, it's hard to convince the funding agency that sometimes local problems are the ones to solve. They want to see bigger things.”

Shaw and Jha began working together in the fall of 2015. During the first year, they tested their in a greenhouse under artificial lights at the Southern Agricultural Research Center. The next year, they moved their experiments outdoors. There in a field, they mounted what looked like an ordinary camera on a tripod. Then they placed potted plants of in between wheat, barley, and sugar beet rows in the field. Jha had grown herbicide-resistant and susceptible strains of under controlled conditions at the research center. Then they took hyperspectral images of the strains and processed them with the computer. Only then could they see which plants were resistant to glyphosate and which weren't.

Shaw said he would someday like to see the flying from drones or airplanes over crop fields. The expectation is that the drones with the will be affordable for growers to use in their production fields. At this point, the process of identifying herbicide-resistant in-crop is available for licensing under a provisional patent application filed in November 2016. Companies have until November 2017 to contact Shaw to say they are interested in licensing and selling the service.

“This won't lead to hardware, but software or services that could be sold,” Shaw said.

Hansen, the farmer who said is a nagging problem, predicted that commercialization could take five to 10 years, but he is excited about the imager's potential. He said he has experimented with chemicals and relied heavily on a glyphosate-based herbicide.

He tries to mow the edges of his field in the fall, but the weed continues to spread.

Lola Raska, executive vice president of the Montana Grain Growers Association, said members of that group were intrigued by the new technology and its potential applications in agriculture. She invited Shaw to speak about it at the MGGA's 2016 annual conference and trade show in Great Falls.

“I wanted to give growers an example of the collaboration that exists between seemingly disparate MSU disciplines,” she said. “Most would not expect that the Optical Technology Center is working on finding practical solutions to agricultural problems.”

Raska added that herbicide-resistant weeds, especially glyphosate-resistant , are an expanding problem in some areas of Montana.

“Early, in-field detection using optics technology offers the potential to help our growers determine the most cost-effective and environmentally sound management solutions to the problem,” she said.

“Early detection is key to managing herbicide-resistant weeds, and growers will be watching closely as research continues.”

Bryan Scherrer, left, a doctoral student in MSU’s Department of Electrical and Computer Engineering, and Vipan Kumar, postdoctoral research scientist at MSU’s Southern Agricultural Research Center, perform hyperspectral imaging of strains in a sugar beet field at SARC in Huntley, in summer 2016.
You Might Be Interested In
previous post