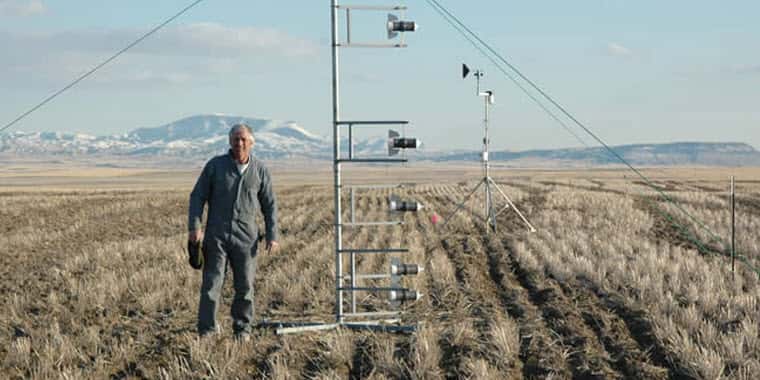 April 20, 2016
BOZEMAN — Montana State University Extension recommends that producers now applying urea fertilizer (46-0-0) protect it from volatilization loss (ammonia loss to the air) by sub-surface banding, incorporation into the soil by tillage or a half-inch of water in a single event or through the use of urease inhibitors.
The standard recommendation for banding nitrogen fertilizer was historically to band it about two inches below seeding depth, or three to five inches below the soil surface – before packing. With increased no-till practices and application of nitrogen at seeding, there is less tillage and banding depth has decreased, allowing for improved seeding efficiency.
“Research indicates band and tillage depth may be very important in reducing losses,” said Clain Jones, soil fertility specialist with MSU Extension and the Department of Land Resources and Environmental Sciences. If the bands or incorporation are not deep enough, ammonia from urea and urea containing fertilizers (e.g., Urea Ammonium Nitrate (UAN) 28-0-0 or 32-0-0) diffuses upwards and can be lost to the air as ammonia gas.
As urea comes into contact with moist soil, the urea converts to ammonium. This temporarily increases the soil pH locally around the fertilizer. The increased soil pH increases the rate of ammonium conversion to ammonia, and if the ammonia is not contained by soil, it is lost to the air.
Studies in central and eastern Canada found this process to be accelerated in subsurface bands of urea or UAN. Concentrated shallow bands (less than two inches deep before packing) of urea or UAN may have higher volatilization loss than broadcast or surface band applications.
Conversion of urea to ammonium and then to ammonia happens more quickly in moist soil than on a dry soil surface, and in Montana it’s often more moist at 1.5-inches down than right at the surface. Shallow bands, especially with dry soil above the band, have insufficient soil packed over the top to contain ammonia in the soil. Banding depth before packing needs to be greater than two inches to minimize N loss to volatilization.
Shallow tillage (less than three inches) may also be insufficient to protect nitrogen loss from urea. Phillipe Rochette, with Quebec Agriculture and Agri-Food Canada, found that across soil types, urea volatilization loss is reduced by around 32 percent for every inch of tillage depth. Jones and his colleague Rick Engel found seeding with air drills after broadcasting urea did not provide enough incorporation to reduce volatilization loss.
“Nitrogen loss from shallow bands, shallow tillage, or broadcast application costs the producer in direct loss of fertilizer and potentially reduced yields,” said Jones. For example, a 20 percent loss of nitrogen applied at 90 pounds per acre, when urea is $550 per ton, is worth $10 per acre loss of fertilizer. Lost yield and wheat grain protein may be worth more than that.
Preliminary results from studies coordinated by Rigas Karamanos (Koch Industries, Calgary), found canola produced approximately four bushels per acre less with urea shallow-banded (less than 1.5 inches) or broadcast without incorporation than with urea banded two to three inches deep. This is presumably because of volatilization differences.
Adding the urease inhibitor N-(n-butyl)-thiophosphoric triamide (NBPT, the active ingredient in products such as Agrotain® and Arborite ® AG) reduces volatilization loss from urea and UAN.
In the Canadian studies coordinated by Karamanos, adding NBPT to broadcast or shallow-banded urea produced the same canola yields as deep-banding untreated urea. In Engel's extensive Montana field trials, NBPT reduced nitrogen loss about 65 percent over untreated urea. “However, the benefit to wheat grain yield and protein by treating urea with NBPT was very dependent on the year and season of urea application,” said Engel.
Nitrogen loss to the air from shallow-tilled, shallow banded, or broadcast urea-based products may not occur in all conditions or every year. However, incorporation by water or three-inch tillage, or banding at least two inches deep are the best ways to ensure nitrogen fertilizer gets to the crop and is not lost to the air.

For more information on urea volatilization see the MSU soil fertility website http://landresources.montana.edu/soilfertility/, or contact Jones at 994-6076 or clainj@montana.edu.