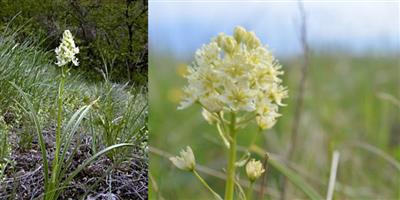 BOZEMAN – A native wildflower with a foreboding name is abundant on Montana rangelands this spring. Death camas (Zigadenus spp.), a plant that resembles wild onion, has caused at least four cattle deaths in Yellowstone County so far this year.

Death camas is highly toxic to cattle, sheep and horses during spring, especially the underground onion-like bulb. When soils are moist, livestock can pull the bulb out of the ground and ingest it. Death camas greens-up early, making it more accessible and palatable than other plants in early spring, contributing to livestock eating toxic amounts.

“Toxicity is less likely if livestock turn-out can be delayed to allow other forage to grow more,” said Mosley. “Toxic levels of ingestion commonly occur in pastures where grass is in short supply.”

There is no treatment for death camas poisoning. The only way to avoid it is to minimize the concentration of the toxin in an animal’s diet. Livestock need to eat as little death camas, and as much grass, as possible.

“Death camas poisoning can be minimized by making sure livestock grazing intensity is light to moderate on rangeland with death camas,” Mosley said. “Also, animals in high body condition are better able to tolerate death camas toxins. Livestock owners should be especially concerned about death camas if livestock are in low body condition coming out of winter.”

The concentration of toxins in death camas and other plants varies with weather.

“This year appears to be a year when growing conditions have caused death camas to be more toxic and more abundant than usual. Livestock owners should try to avoid spring grazing this year in pastures where death camas is abundant,” said Mosley.

Some evidence indicates that death camas is more toxic to livestock during cool, stormy weather.

“The chemical structure of the toxins in death camas becomes more toxic when the barometer drops, increasing chances of livestock poisoning even when livestock don’t eat very much death camas,” warned Mosley.

“Livestock owners should be cautious with death camas if they have purchased livestock from outside their herd,” Mosley said. “Livestock new to the area likely have less genetic resistance to the death camas that is growing on their rangeland.”

Death camas is difficult to control with herbicides. Dicamba and 2, 4-D can be effective when applied in early spring when plants have three-six leaves and before flowering stalks appear.