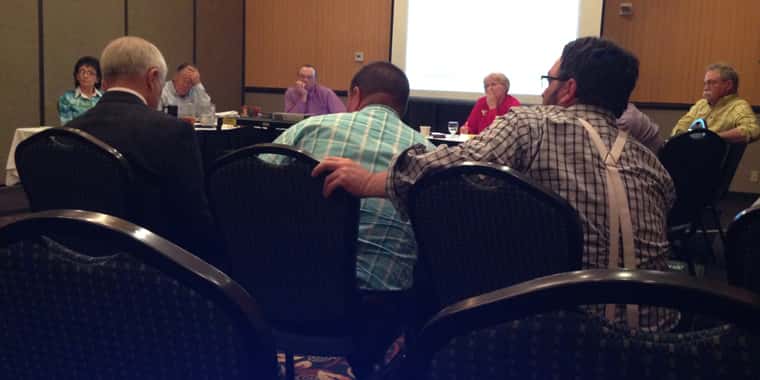 At a Tuesday meeting in Helena, the Board again heard from George Harris, Centralized Services, of the bleak state of the Department's budget.

The following is a press release from the Montana Department of Livestock:

In an effort to address funding issues for the Department of Livestock, the Montana Board of Livestock has created a subcommittee for budget oversight, guidance and planning.

Board chair Jan French, a cattle rancher from Hobson, appointed board members John Scully (Ennis/cattle), Brett DeBruycker (Denton/cattle) and John Lehfeldt (Lavina/sheep) to the subcommittee at yesterday’s Board of Livestock meeting, and encouraged industry groups to take a seat at the table and help find solutions to recent funding shortfalls.

“It’s clear that we have some issues with the budget, and that industry is concerned,” French said. “So the best way to move forward is by communicating and working together.”

Errol Rice, executive vice president of the Montana Stock Growers Association, said the state’s oldest industry group plans on playing a prominent role and hopes that other groups will also get involved.

“It’s a positive move,” Rice said of the subcommittee. “We’re looking forward to working with the board members and representatives from other livestock industry groups on issues like the budget, cash flow and the diagnostic laboratory. We have to keep looking forward.”

French said the one-day meeting was busy and productive, including the formation of the subcommittee.

In other board news:

The next board meeting has been scheduled for September 29-30.

NORTHERN AG NETWORK NOTE:  Also at the meeting, the Board of Livestock voted to approve the proposed rule that expands Montana's “Designated Surveillance Area” for brucellosis.  This has already seen a public comment period.  Dr. Marty Zaluski, State Veterinarian, also suggested easing restrictions on imported cattle when it comes to brucellosis vaccination.  This will be written as a proposed rule and go to public comment.

For background on the budget issues being discussed, please read “MT Board of Livestock Told to Stop Breaking the Law” and “Fixing Budget Woes at the MT Department of Livestock.”

Source:  Montana Board of Livestock

Ask the Taxman: Can We Gift Grain to the Kids?