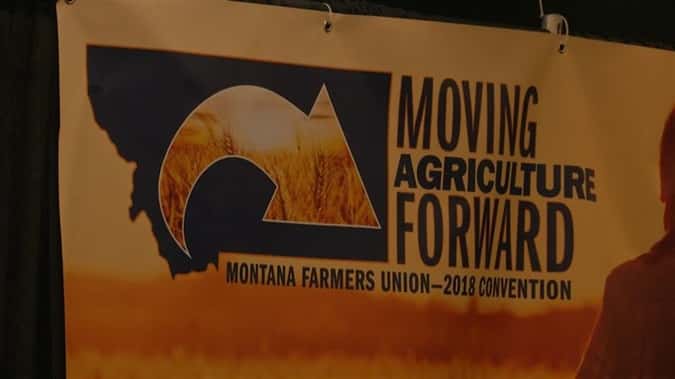 Another Montana Farmers Union Convention is in the books and farmers and ranchers from across Montana have helped set the organization’s policy for the coming year.

“Members of course get together once a year” said Montana Farmers Union president Alan Merrill from Big Sandy. “We come together and work on policy, by-law changes for the organization and set the pace for the next year.”

With another Montana legislative session around the corner, he says water will be a big issue in 2019 at the state capitol in Helena.

“The different private well water issues that are hitting not only the urban areas but even out on the farm with irrigation” said Merrill. “How much water are you going to get? The water coming down the different rivers. Who has the rights to them? Water is really important.”

As for national policy, the National Farmers Union’s Matt Perdue says getting a new farm bill finalized in Congress and signed by the President after the November elections is their number one priority.

“A lot of the members of Congress are back in their states” said Perdue. “It’s obviously campaign season and folks are getting a lot of chances to interact with them. But, the work continues in Washington, DC and staffers are still having conversations. There are some big differences between the House and Senate versions particularly on Title 4 that’s the Nutrition Title. We’ve heard a lot about those issues there. There are also some outstanding issues with the Title 2 the Conservation Title particularly with the House merger of EQIP and CSP where the Senate just followed a different structural path with that title. So, trying to bring together those differences and make sure we have a good farm bill that serves family farmers and ranchers well.”

For members like Tom Clark of Ft. Benton, he appreciates having the Montana Farmers Union working on his behalf both in Montana and Washington, DC.

“I’m a Farmers Union member because after becoming a farmer eight years ago and learning more about Agriculture it became apparent to me that there is a place for having a voice with Agriculture” said Clark. “It’s not just doing the farm work or growing the grains but to actively have a voice in the legislation or in our community. Farmers Union with the emphasis on family farming really is important to me in trying to make sure that we are either at the state level or national level doing everything we can to enhance the lifestyle of family farming.”

Other big policy items for the Farmers Union in 2019 include trade and fake meat.