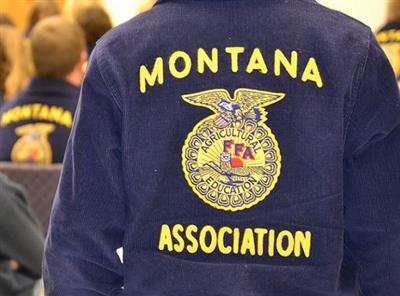 Montana FFA Members recently returned from participation at the National FFA Convention and Expo held in Indianapolis, IN.  Approximately six hundred Montana students attended the convention where they engaged in competitions, leadership workshops, tours and educational seminars.  This annual event attracted nearly 61,000 members from across the nation.

In the national Food Science and Technology Competition, the number one team in the nation comes from the Missoula FFA Chapter.  Missoula bested thirty-seven other state winning chapters to earn the title.  Team members were Claire Standley, Joel Standley, Quinlan Turner and Shaun Billingsley.  This is the first national team winner from Montana since 2010.

Individual members that rose to the top in their respective competitions were led by:

Perhaps the individual highlight of the convention was when Carson Crary from the Choteau FFA Chapter was named as the national winner in the Outdoor Recreation Proficiency Award area.  Proficiency awards recognize students who excel in their work-based learning experiences.

Additionally, Kara Conley and Faith Berow from Missoula placed 5th in the Animal Systems section of the National Agriscience program.

The following are the results of how the other Montana chapters placed* during this year’s national convention:

*Note – Gold, Silver and Bronze ratings represent roughly the top, the middle, and the lower third of teams participating.

Four individuals received the Honorary American FFA Degree for their support given to Montana FFA over the years, they are:

Finally, Montana Agriculture Education was awarded a 100% membership award and the Montana FFA Association received an award for membership growth.

The next event for Montana’s FFA Members will be the Montana FFA Ag Expo, a regional activity set for Nov. 10th – 12th in Bozeman.

Farmers Say Cover Crops Are On 40 Percent of Cropland