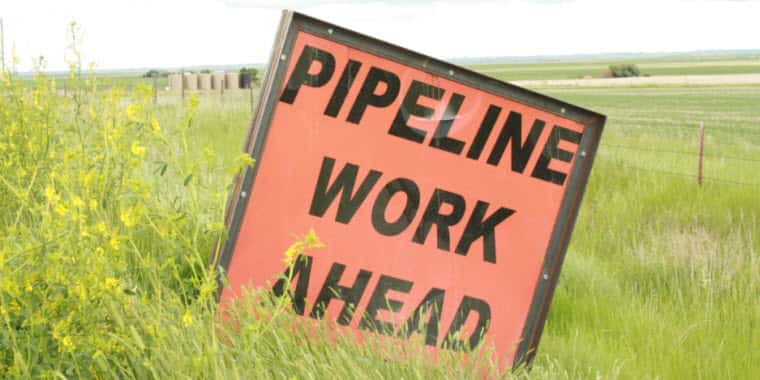 TransCanada filed a new application on Thursday to complete the tri-state pipeline from Alberta to Nebraska, including a bypass in Montana for Williston Basin crude from the Bakken. The Army Corps of Engineers has been directed to expedite the decision to grant an easement beneath Lake Oahe in North Dakota for the Dakota Access Pipeline.

Pipelines are lifelines to the American economy and modern way of life. They are an indispensable part of our nation’s energy infrastructure and the safest means of transporting petroleum products.

DAPL
Dakota Access, a 30-inch-diameter pipeline owned by Energy Transfer Partners, will move up to 570,000 barrels per day from the Bakken oil fields to Patoka, Illinois. It was scheduled to be operational by the end of 2016. All permits, including approval by the U.S. Army Corps of Engineers, were obtained by the company; however, protests, federal intervention, and a change in position by the Corps have stopped the pipeline in its tracks.

Self-proclaimed “water protectors” have descended upon a protest site near Lake Oahe at the confluence of the Cannon Ball and Missouri Rivers to protest the pipeline crossing a half mile North of the Standing Rock Sioux Indian Reservation. Celebrities and environmental activists have flocked to North Dakota to stop what they believe is an injustice against the Sioux people.

A lawsuit was filed by Earthjustice on behalf of the Standing Rock Sioux tribe which stated, “The public water supply for the tribe, which provides drinking water for thousands of people, is located a few miles downstream of the proposed pipeline crossing route.” It argues, “The cultural and religious significance of these waters cannot be overstated. Construction of the pipeline … and building and burying the pipeline would destroy burial grounds, sacred sites and historically significant areas on either side of Lake Oahe.”

Consultation with GeoEngineers, a subcontractor on the Dakota Access Pipeline, provided information which concluded that the boring process would not be of a magnitude to impact natural features, cultural resource features or above ground structures. Chairman and CEO of Energy Transfer, Kelcy Warren wrote, “concerns about the pipeline’s impact on the local water supply are unfounded,” and “multiple archaeological studies conducted with state historic preservation offices found no sacred items along the route.” Within the corridor where the Dakota Access Line was sited, lays an existing natural gas pipeline.

In September, Judge James Boasberg of the U.S. District Court denied the Tribe’s lawsuit to block pipeline construction, citing a lack of evidence that building the pipeline would harm the Tribe or cultural resources. The Judge added that while the Tribe had been provided countless opportunities to comment on the proposed route, tribal members did not appear at any of the 141 meetings held in North Dakota by the Dakota Access team.

Immediately following the failed lawsuit, the Departments of Justice, Interior and the Army Corps of Engineers announced an indefinite suspension of pipeline construction to reassess cultural impacts to what the Tribe calls sacred ground. In the announcement to halt construction beneath Lake Oahe, it was said the conflict highlights the need to consider “nationwide reform with respect to considering tribes’ views on these types of infrastructure projects.”

Keystone XL
Across the border; President Trump gave Canadian midstream company TransCanada the go-ahead to resubmit an application for the long-awaited Keystone XL pipeline. A new application was filed yesterday.

Keystone XL is a proposed 36-inch-diameter crude oil pipeline which starts in Hardisty, Alberta, and stretches south to Steele City, Nebraska. It would deliver up to 870,000 barrels of crude oil per day to gulf refineries, and contribute $3.4 billion to the national GDP.

Keystone XL has served as a poster child for needlessly delayed projects under the Obama Administration. After a half-decade-long process, the Keystone XL decision was pushed off indefinitely, in spite of extensive study by Obama’s State Department.

In 2014, the State Department released a report which should have cleared the path to approval of the pipeline. It concluded that the Keystone XL would not substantially impact greenhouse .

Had TransCanada been approved for construction three or four years ago, the pipeline would likely have sailed smoothly through Montana, where the pipeline was already approved. The Land Board voted unanimously in 2012 to grant rights-of-way to TransCanada.

Unquestionably, the Dakota Access protest near the Standing Rock reservation in South Dakota has placed pipeline projects in the crosshairs for opponents. Following the announcement of Trump’s executive orders, protesters warned they’d be out in full force to stop the projects from being built. No doubt the passivism of the Obama administration has empowered activists and opponents of the oil and gas industry.

Law enforcement and  efforts at the Dakota Access site have cost North Dakota more than $22 million dollars. The question many should be asking right now is whether or not Montana is prepared for similar protests over Keystone XL.

Two years ago, the Sioux and Assiniboine tribes of the Fort Peck Reservation passed a resolution opposing the Keystone XL pipeline.
The 2015 resolution was the result of concerns that a pipeline failure upstream from Fort Peck Dam could contaminate the entire Missouri River water supply. In North Dakota, similarly, concerns have been over the impact to water in Lake Oahe and the Missouri River, which provide drinking water to the Standing Rock reservation through an intake located downstream.

Additionally, a TransCanada spokesman said the company previously agreed to 59 special conditions for the project, including the use of flexible, high-strength carbon steel near waterways that can withstand the impact of a 65-ton excavator. The steel TransCanada will use is designed with special features to reduce corrosion.

Both the Keystone XL and Dakota Access Pipelines will be utilizing the latest and safest monitoring technologies, including pressure and temperature sensors and automatic shutoff valves. Before any crude moves through either pipeline, they will be required to be to ensure their mechanical integrity. Once complete, these pipelines will be monitored 24/7 from a central control station capable of responding within seconds to any pipeline abnormality.

Beyond the protest of the tribes and environmental groups, Keystone XL has earned widespread support from landowners, county commissioners, legislators, Montana’s Governor and congressional delegation. That’s because of the enormous economic impact the pipeline would have, making it a boon for hard-up rural communities.

Nearly three hundred miles of Keystone XL would cross through Phillips, Valley, McCone, Dawson and Fallon counties in Montana, supporting 3,700 jobs and generating $127.2 million in Montana wages. It will include a bypass known as the Bakken Marketlink, which will transport crude out of the Williston Basin to the Gulf coast. The Marketlink will create 200 jobs and generate $10.3 million Montana earnings. In property taxes, the pipeline will yield approximately $26 million dollars and a total of more than $760 million in new economic activity in Montana.

Under the Obama Administration, federal agencies relied upon political gamesmanship and an arbitrary application of the law to shelve projects which would spur the nation’s economy. Many of the decisions and rules made over the last eight years were fueled by an agenda to dismantle the energy industry; an agenda which has made casualties of America’s working class.

Trump’s Move
President Trump’s executive orders regarding the Dakota Access and Keystone XL Pipeline – along with his cabinet selection and repeated calls for a regulatory roll-back – provide a glimpse into the agenda he campaigned on; an agenda focused on unleashing the country’s energy potential.

While cautiously optimistic, many in the oil and gas industry, from corporate offices to rig floors, are looking forward to the resurrection of a consistent application of the law and predictable energy policies that put boots (and drill bits) back on the ground.