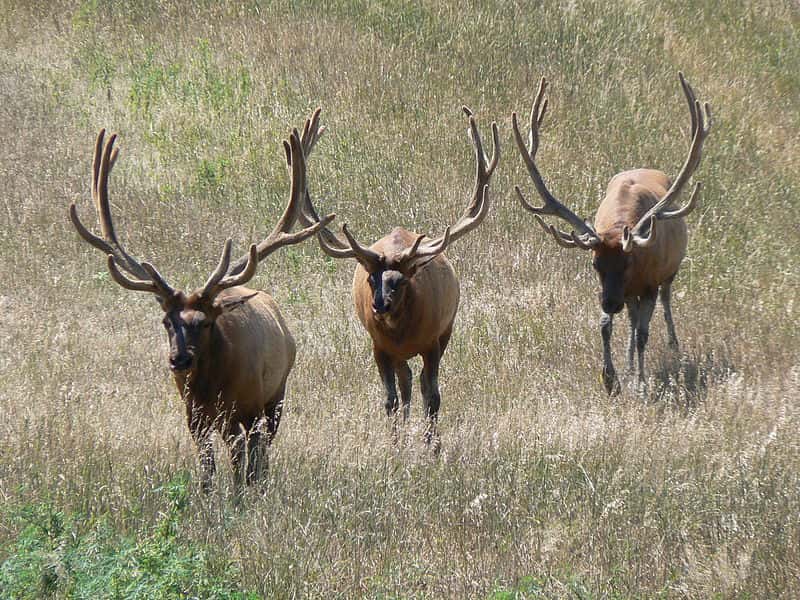 MT Retreats from Plan to Lessen Disease Risk to Cattle

(Reuters) – Montana wildlife managers on Friday backed off a plan to allow ranchers near Yellowstone National Park to kill elk as a disease prevention measure, after the plan sparked criticism and a lawsuit by hunting groups, an official said.

State wildlife commissioners last month approved the pilot project designed to lessen risks of elk infecting cattle in Montana with brucellosis, which can cause cows to miscarry.

Montana Fish, Wildlife and Parks spokesman Ron Aasheim said the agency retreated from the plan in light of the lawsuit and conflicts with hunting groups.

“We’ve regrouped here and said, ‘Let’s not fight this, let’s work out an amicable solution,’” he said.

The plan to target elk from the area of Yellowstone National Park was backed by the state’s influential livestock industry, which fears wild herds of elk and bison exposed to the disease. The wild animals seasonally migrate from Yellowstone into Montana, and ranchers worry that could threaten the state’s brucellosis-free status, which allows their cattle to be shipped across state lines without testing.

But the proposal to allow ranchers to kill as many as three elk each during a period when many elk cows are pregnant drew the ire of sportsmen, whose hunting licenses and tags provide the bulk of revenue for Montana Fish, Wildlife and Parks and who have traditionally been the agency’s staunchest allies in battles with conservationists over wildlife management.

Elk are the latest wildlife in contention in a years-long fight over brucellosis that has seen thousands of Yellowstone bison captured and sent to slaughter for wandering into Montana in search of food.

The Skyline Sportsmen’s Association and the Anaconda Sportsmen’s Club this week asked a state judge to halt the elk killing plan.

The Montana-based hunting groups claimed in the lawsuit that transmission of brucellosis from wild animals to domestic cattle “is rare and unlikely” and faulted the wildlife agency for management strategies that focused on thinning wild bison and elk herds instead of pushing for vaccination of cattle.

The Montana Stockgrowers Association did not immediately respond to a request for comment on Friday.

NORTHERN AG NETWORK NOTE:  The following statement was provided to us from the Montana Stockgrowers Association in response to the above Reuters article.

Due to unfortunate timing, Reuters did not include MSGA’s comments on this important development in the management of brucellosis in Montana.

The Montana Stockgrowers Association (MSGA) supports the development of wildlife management programs to reduce the possibility for transmission of brucellosis to cattle; including the elimination of elk/cattle contact on livestock feed grounds. Elk tend to migrate to livestock feeding, calving and grazing areas for a variety of reasons, which increases the risk of brucellosis to Montana’s cattle. All recent positive cases of brucellosis in Montana cattle have been the result of transmission from elk, reinforcing the need for programs to reduce the potential for contact and transmission.

MSGA appreciates the actions taken by the Montana Department of Fish Wildlife and Parks (FWP) and the Department of Livestock to utilize effective means to decrease and eventually eliminate the presence of brucellosis in the Greater Yellowstone Area (GYA). This includes actions taken by FWP to address site and herd specific risk of transmission of brucellosis from elk in the GYA, and the continuation of established cattle brucellosis vaccination and surveillance programs within the state.

MSGA also appreciates and is encouraged by the efforts from FWP to develop and implement additional strategies to reduce the risk of brucellosis transmission. The proposed plan by FWP was a pilot project to ease the pressure of elk herds around livestock feeding, calving and grazing areas. MSGA will continue to move forward working with state and federal agencies to address the risk of brucellosis transmission from wildlife to cattle.