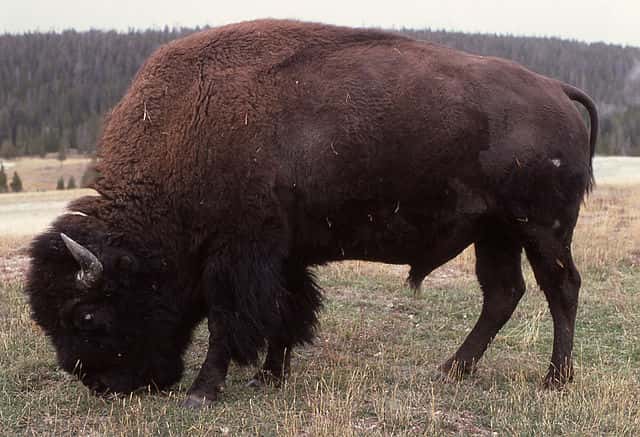 March 19, 2014
Should Yellowstone National Park bison be allowed in the state of Montana year-round?
It's a hot topic not only in Montana but on the national scale.  Talking to Northern Ag Network after a Montana Board of Livestock (BOL) meeting convened on Tuesday, Errol Rice of the Montana Stockgrowers said that a story on the topic made its way to the third page of today's Wall Street Journal.  Titled “Plan to Let Bison Roam Farther Irks Ranchers,” you can read the article HERE.
According to the Billings Gazette:
The draft proposal would allow bison, also known as buffalo, to roam year-round across more than 400,000 acres in Montana whenever the population totals 3,300 or fewer animals. That includes some areas without any bison now, such as the Taylor Fork of the Gallatin River, and other locations where the animals have been allowed only during winter.
Addressing the proposed expansion, the BOL supported a take-no-action alternative at their meeting in January.  This week at their March meeting, they moved to delay any final decision until a more comprehensive fiscal analysis could be completed.
Rice says the Montana Stockgrowers Association was pleased.  While there are livestock implications in the area immediately being looked at for the expanded zone, there is a bigger concern for the state’s commercial cattle industry.  “We're clearly concerned over the potential fear factor,” Rice says, “that our other state trading partners may have on the commercial viability and marketability of the cattle coming out of the four-county area of the designated surveillance area due to a proposal like this.”
Rice also says that an extensive amount of the two-day BOL meeting was focused on the executive planning process.  Essentially their budget, Rice says that the industry will be working very closely with a subcommittee of the BOL to offer input into their budget size, scale, and its overall fiscal dimension.  This, he says, will be an important item for Montana's state legislature to consider.
© Northern Ag Network 2014
Haylie Shipp
You Might Be Interested In
previous post