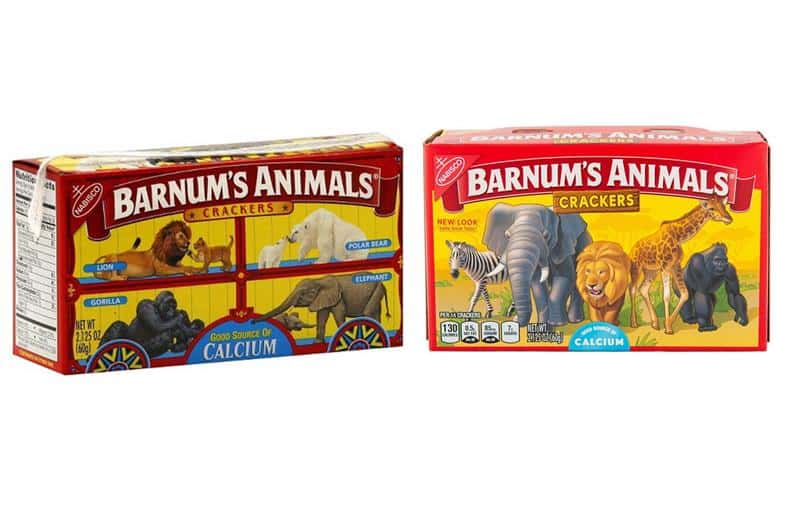 First the circus closed, now the beasts on boxes of animal crackers have been turned loose. Under pressure from People for the Ethical Treatment of Animals (PETA), Nabisco has redesigned packaging of Nabisco’s Barnum’s Animal crackers removing – after more than a century – the cages.

Last year Ringling Bros. and Barnum & Bailey Circus shut down, citing declining ticket sales. Feld Entertainment’s chief executive, Kenneth Feld, said the closure was due to declining ticket sales and the move to rid the circus of its elephants following a shift in public opinion toward circus animals.

PETA, which has been protesting the use of animals in circuses for more than 30 years, also had their sights set on Nabisco’s cracker boxes. In 2016, PETA wrote to Mondelez International, the parent company of Nabisco, with a mockup design without bars and an explanation that circuses often mistreat animals. Illinois, where Mondelez has its headquarters, became the first U.S. state to ban circuses with elephant shows at the start of this year.

“Given the egregious cruelty inherent in circuses that use animals and the public's swelling opposition to the exploitation of animals used for entertainment, we urge Nabisco to update its packaging in order to show animals who are free to roam in their natural habitats,” PETA said in its letter.

The redesign of the boxes, now on U.S. store shelves, retains the familiar red and yellow coloring and prominent “Barnum's Animals” lettering. But instead of showing the animals in cages – implying that they're traveling in boxcars for the circus – the new boxes feature a zebra, elephant, lion, giraffe and gorilla wandering side-by-side in a grassland.

“The new box for Barnum's Animal Crackers perfectly reflects that our society no longer tolerates the caging and chaining of wild animals for circus shows,” PETA executive vice president Tracy Reiman said. “PETA is celebrating this redesign, just as we've celebrated the end of Ringling Bros. circus and the introduction of animal-circus bans across the U.S.”