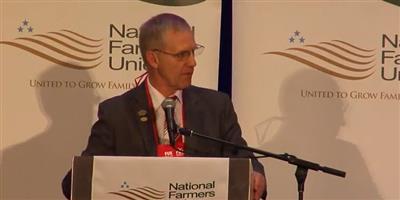 National Farmers Union pleased to be in Minnesota for Annual Convention

Minneapolis, MN (March 2, 2016) – The land of 10,000 lakes is playing host this year to the National Farmers Union’s 114th Anniversary Convention. On Sunday, North Dakota native Roger Johnson was re-elected as NFU’s president and says NFU is proud to be in Minnesota this year for its annual convention.

MINNEAPOLIS (March 6, 2016) – Embracing a robust grassroots network of farm leaders, the National Farmers Union (NFU) officially convened its 114th Anniversary Convention today in Minneapolis, Minnesota. More than 500 members from across the country are gathered for the annual event, which runs through March 8.

“The NFU convention is an important event for our members and the organization as a whole. Not only do attendees get to learn and collaborate through breakout sessions, thoughtful panel discussions and industry tours, but the annual convention sets the stage for NFU’s policies and priorities in the year ahead,” said NFU President Roger Johnson.

Attendees began to gather at an opening reception for the convention yesterday evening. A special video message from President Barack Obama, a friend of renewable energy and climate change mitigation, and a strong supporter of rural America, was presented at the opening banquet.

“With the help of partners like the National Farmers Union, we’ve worked to create new opportunity in rural America in the last seven years,” said President Obama. “We’ve invested in renewable energy, helping thousands of farmers install windmills, solar panels and biomass projects on their land.”

Gov. Dayton applauded the importance of family farmers and ranchers, stating, “Across this country, citizens depend on today’s food and tomorrow’s agricultural innovation. Every main street business, every school, every community in Minnesota all depend on our farmers.”

Sen. Franken echoed the importance of stewardship and renewable energy programs. “When I visit with farmers, I’m amazed by the many hats a farmer wears to keep the farm running. I recently had the chance to tour a Minnesota farm that implemented the Renewable Energy for America Program. As we better our understanding of stewardship towards the planet, renewable energy, wind energy and biomass will become more important to the rural economy,” he said.

Sen. Klobuchar recognized NFU for supporting strong farm policy programs, remarking: “Farmers Union has been a great ally in protecting family farmers and ranchers against those who are trying to tear down the policies we passed in the most recent Farm Bill. As we work through challenges, such as the avian flu outbreak or the major drought in the West, we’ve seen the need for a strong safety net for our family farmers.”

Rep. Emmer commented on the need to focus on trade for American farmers and ranchers, “It’s important that we have conversations about trade to ensure we have markets for the superior products we produce in this country. We have spent so much time as a nation focused across the Atlantic and Pacific Oceans, and I respectfully believe that we have failed to pay attention to the Western Hemisphere and Cuba in our own backyard.”

Over the next several days, attendees will participate in general session meetings, breakout panels and industry tours. The information learned will provide context for the policy discussions and line-by-line policy review by Farmers Union delegates in the final days of the convention. This process “truly embodies NFU’s strong grassroots network,” Johnson explained. “As a farmer-led organization, this process is very important to who we are as an organization and the type of policy we bring to the table in Washington, D.C.”

Tomorrow, keynote speakers U.S. Department of Agriculture Secretary Tom Vilsack and General Wesley Clark will address some of the most important challenges facing agriculture. To learn more about the scheduled events at the NFU 114th Anniversary Convention, visit the website at: nfu.org/convention.

National Farmers Union has been working since 1902 to protect and enhance the economic well-being and quality of life for family farmers, ranchers and rural communities through advocating grassroots-driven policy positions adopted by its membership.