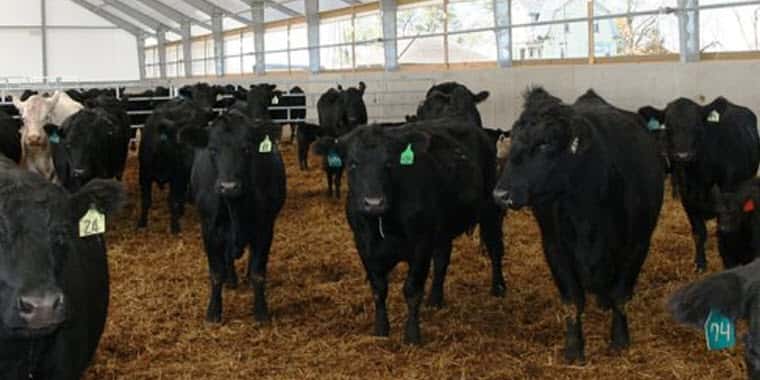 The following is a portion of an article by Mitchell Ferman

A cattle feeder from Ainsworth, Nebraska, stared in awe at a student on Chicago’s South Side when the teen said that cattle changed his life.

Mark Miles, 30, was with the 29 other members of his Nebraska LEAD group — an organization that started 33 years ago to prepare agricultural leaders from the state — at the Chicago High School for Agricultural Sciences in February.

Miles recalled the student saying that he was not close with his father, was not good at sports or music and had no confidence. But, Miles said, when the student came to the school and started working with cattle, he finally found something in life that he enjoyed.

On May 31, Miles and another member of the LEAD group, Bryan Palm, loaded six steers into a trailer to deliver and donate to the school.

Each steer cost about $2,000. Miles donated two, Palm donated two, other members of the LEAD group pooled money to donate one and the final steer was donated by First National Bank of Omaha. Miles used to work at the bank, and Tom Jensen, Miles’ former boss, said the bank is a strong supporter of agricultural lending and was happy to sponsor a steer.

Miles isn’t the first to donate to the school; four steers came from last year’s LEAD (Leadership Education/Action Development). But Miles wants to make this a tradition, whether through LEAD or on his own. Not only does he want to donate, he has a bigger idea. After all, Miles said, this was one of the most rewarding things he had ever done.

Maggie Kendall, an animal sciences teacher at the agricultural school in Chicago, whom Miles kept in touch with, will work with Miles to set up a visit from the students. Those who are interested in visiting Nebraska — and Miles said many are — will submit essays about agriculture and why they would like to get into the business. Miles will select 10 students to visit his farm for a couple of weeks in August.

Many of the school’s students come from homes in dangerous parts of Chicago. Not many of the students are growing up in two-parent households. Kendall said some of her students have to go home from school to bullet holes in their buildings.

Miles can’t wait to show them the Great Plains, how to handle the cattle and, generally, what it’s like to live in a farm town.