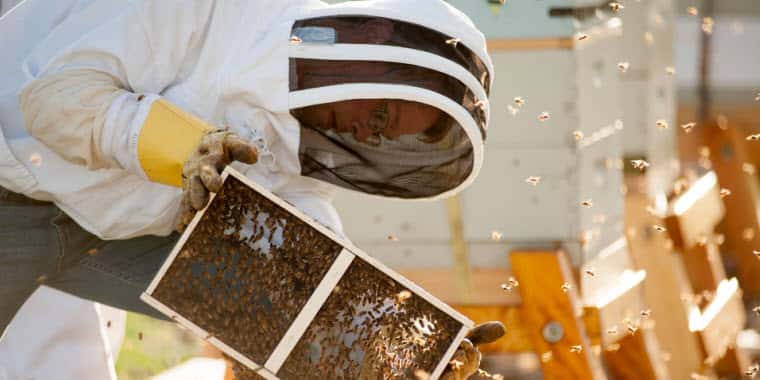 by Marshall Swearingen for the MSU News Service

Michelle Flenniken, assistant professor in the Department of Plant Sciences and Plant Pathology in MSU’s College of Agriculture, will use the bees to study how pathogens such as viruses affect honey bee health. The research holds promise for understanding the causes of a recent decline in bee colony numbers.

“It's exciting,” Flenniken said as she and two graduate students who work in her lab, Alex McMenamin and Laura Brutscher, donned protective suits and handled the shoebox-sized bee “packages,” each containing a queen and thousands of worker bees.

“This is one way a new beekeeper can start a colony, the other method is to split an existing colony into two colonies and either purchase a queen for the new colony or ensure the new colony has a queen cell so that the worker bees can raise a new queen bee,” Flenniken said.

A queen bee is kept in a separate box until she and the workers are added to the new colony. MSU photo by Kelly Gorham

At each of six prepared hive boxes, Flenniken's team delicately inserted the queen from a bee package, dumped the mass of buzzing bees inside, then stacked additional hive boxes on top — room for each new colony to grow.

“You'll notice these bees are light-colored,” said McMenamin, who joined many local beekeepers in Belgrade to receive the bee packages, which were trucked from California. “They're Carniolans,” a subspecies of bee native to the Balkan region, he explained.

In 2015, Montana was home to about 150,000 honey bee colonies and reaped a $24 million honey harvest, one of the largest in the U.S. But honey bees nationwide are under considerable stress, with colony losses exceeding 30 percent annually in recent years.

Though approximately five percent of the honey bee colony losses nationwide are attributed to Colony Collapse Disorder, CCD, — a poorly understood phenomena associated with a defined set of symptoms — the majority of losses are not due to CCD.

Research in the Flenniken lab is aimed at better understanding how multiple biotic factors such as viruses, bacteria, fungi and mites affect colony losses with other factors such as agrochemicals and weather events.

“It isn't just one factor” that's responsible for colony losses,” Flenniken said. “Currently, researchers are focused on determining how multiple, synergistic factors cause the death of a colony.”

Using samples from collaborating commercial beekeepers from across the state and bees sampled from the Honey Bee Research Site, Flenniken and her students assess the incidence and abundance of pathogens — viruses, bacteria and fungi — associated with field samples using molecular analyses, and perform laboratory-based studies to examine how the insects respond to viral pathogens and agrochemicals.

“We're trying to learn how honey bees respond to pathogens at the molecular level,” Flenniken said.

“We're asking basic questions,” she said. “If a honey bee is infected with a virus, what genes get turned on? How does that bee fight off that infection? If the bee is simultaneously exposed to an agrochemical, does virus abundance or gene expression change?”

The research “is timely,” said John Sherwood, head of MSU's Plant Sciences and Plant Pathology Department. “People are recognizing this as an important problem,” he said, adding that Flenniken “is absolutely at the cutting edge of the approach she is taking.”

This is the first year that honey bee packages have been installed at the Honey Bee Research Site and Pollinator Garden, which was initiated in 2013. The site will also serve as a forum for public outreach on pollinator issues.

“In the long term,” said Flenniken, “we hope that answering these questions will help us develop strategies to enhance honey bee health.”