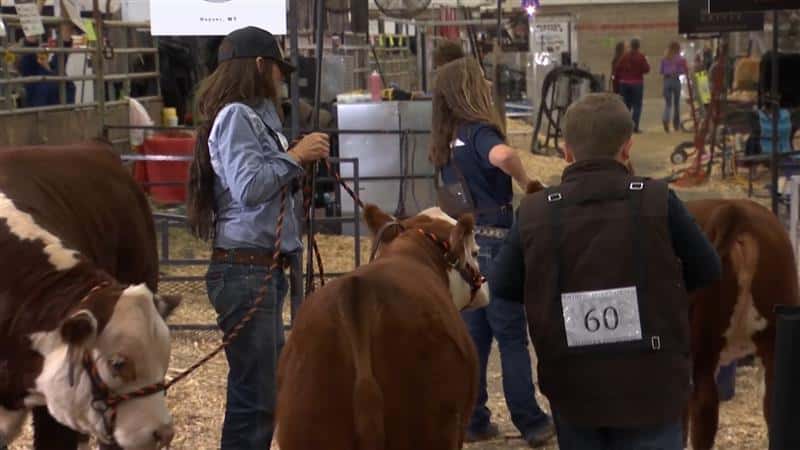 This week the Northern International Livestock Exposition is underway in Billings, MT. And through the years, the NILE has always been a show with some of the purest and most influential livestock genetics in the world. But, the NILE has also gained recognition for helping young people get a start in the livestock industry.

“It’s really fun because you get to learn new things” said Chael Roberts of Roberts Cattle from Absarokee, MT. “I’ve always really liked to just be around cows.”

For over 50 years, the NILE has been helping to preserve our western way of life. It’s also been investing in the next generation like this 9-year old who loves coming to the NILE and learning about livestock showmanship.

“Getting to go in the show ring, washing, blowing and getting to do it with my family” said Roberts.

The NILE is in the blood of the Roberts family. Chael’s father, Jeremy also showed cattle at the NILE as kid and still does.

“I grew up showing steers” said Roberts. “I’ve probably come to the NILE for 25 years and I don’t know if I’ve missed one. Maybe I didn’t always have cattle here but if I didn’t I was helping somebody else.”

Now as a parent, it’s really special he says for his wife Kate and him to watch Chael follow in their footsteps.

“It makes you feel good” said Roberts. “You see the passion and the try and all the little things you try to teach them every day like honesty, integrity, hard work, get out of bed in the morning and go to bed at night so you can roll out. To see them happy and smile that they’ve done well. To get paid off for their work makes it all worth it.”

Chael says he appreciates the time he spends with his parents.

“The best part of hanging out with them is being able to do hands on things” said Roberts.

Jeremy says it’s events like the NILE that are also teaching their son some valuable life lessons.

“You have to learn how to talk to people” said Roberts. “Look at them, shake their hand, be honest, tell them the truth, work hard and do what you say.”

As for the future, this 9-year old wants to continue to show cattle and someday own his own ranch. He also says that people both young and old need to appreciate farmers and ranchers and where their food comes from.

“Then you’re more thankful for it. Because you know what you’ve done to produce the food and know where it’s coming from” said Roberts.

It’s stories like this that only reinforce that the NILE’s mission of educating the next generation of farmers and ranchers is indeed working.

To learn more about the NILE and it’s youth programs, visit the organization's website at www.thenile.org.