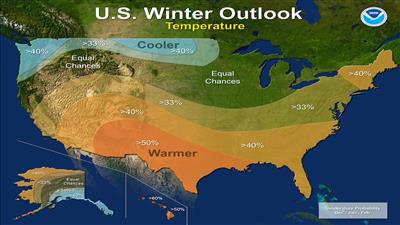 NOAA Forecasts Mild Winter for Much of the U.S.

Winter is coming, and the National Oceanic and Atmospheric Administration has released its predictions about what weather the season will likely bring.

But it may not help to break out the snow shovels and heavy winter coats just yet. NOAA's latest seasonal outlook, which covers December 2018 through February 2019, expects mostly warmer-than-normal weather this winter for the western two-thirds of the country, with no areas of the U.S. expected to see prevalent cooler-than-normal conditions.

As for precipitation, much of the lower Southwest, Mid-South, Southeast and Mid-Atlantic regions have the greatest chance to see wetter-than-normal conditions this winter. Parts of the Great Lakes Region and portions of Montana and the western Dakotas are more likely to see drier-than-normal conditions prevail. Much of the rest of the country has equal chances to see wetter or drier weather this winter, NOAA predicts.

“We expect El Niño to be in place in late fall to early winter,” says Mike Halpert, deputy director of NOAA's Climate Prediction Center. “Although a weak El Nino is expected, it may still influence the winter season by bringing wetter conditions across the southern United States, and warmer, drier conditions to parts of the North.”

Other climate patterns that are harder to predict can still affect wintertime weather in the U.S., Halpert adds. For example, the Arctic Oscillation influences how many times arctic air masses can move further south, which affects the East Coast in particular. And the Madden-Julian Oscillation can create heavy rain and snowfall across the West Coast when El Niño is weak – which forecasters currently expect.