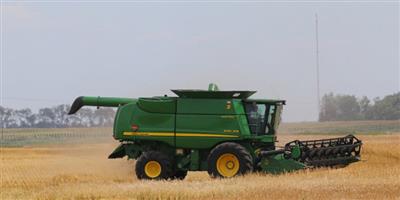 LINCOLN, Neb. (DTN) — A North Dakota farm filed a class-action lawsuit last week, alleging John Deere is violating the Sherman Act in not making diagnostic software available to farmers who want to repair their own equipment.

The lawsuit filed in the U.S. District Court for the District of Northern Illinois alleges John Deere has monopolized the repair service market for John Deere brand agricultural equipment with onboard central computers known as engine control units, or ECUs.

Forest River Farms in Forest River, North Dakota, asked for a trial by jury and wants the court to order John Deere to make the necessary software available to individual farmers and repair shops.

In addition, the lawsuit seeks damages for farmers who have paid for repairs from John Deere dealers beginning on Jan. 12, 2018, to the present.

The right to repair increasingly has become an issue in agriculture and other industries with state legislatures introducing bills in at least 32 states, including bills in 21 states in 2021.

“Farmers have traditionally had the ability to repair and maintain their own tractors as needed, or else have had the option to bring their tractors to an independent mechanic,” the lawsuit reads. “However, in newer generations of its agricultural equipment, Deere has deliberately monopolized the market for repair and maintenance services of its agricultural equipment with ECUs by making crucial software and repair tools inaccessible to farmers and independent repair shops.”

In addition, the lawsuit alleges Deere’s network of “highly consolidated independent dealerships” is “not permitted through their agreements” with Deere to provide farmers or repair shops “with access to the same software and repair tools the dealerships have.

“As a result of shutting out farmers and independent repair shops from accessing the necessary resources for repairs, Deere and the dealerships have cornered the Deere repair services market in the United States for Deere-branded agricultural equipment controlled by ECUs and have derived supracompetitive profits from the sale of repair and maintenance services.”

“Historically, farmers who owned Deere tractors have had the option of repairing their tractors themselves or taking them to an independent repair shop of their choosing,” the lawsuit said.

The lawsuit said farmers report their tractors shutting down from computer faults. This requires producers to wait for John Deere technicians to arrive on-farm “while they lose valuable time, which can lead to expensive crop losses. Without the firmware, the product is incomplete and will not run, making the firmware as vital a part to the basic functioning of a tractor as a steering wheel or an engine,” the lawsuit said.

“According to a report from a U.S. Public Interest Research Group, the John Deere S760 combine harvester has 125 different computer sensors in it. If any one of those sensors throw an error code, the combine will enter limp mode.”

As of 2021, the lawsuit said, farmers pay between $150 to $180 per hour for Deere repair services from an authorized dealer.

In September 2018, the Equipment Dealers Association, a trade and lobbying group that represents John Deere and other manufacturers, committed to make repair tools, software and diagnostics available to the public by Jan. 1, 2021.