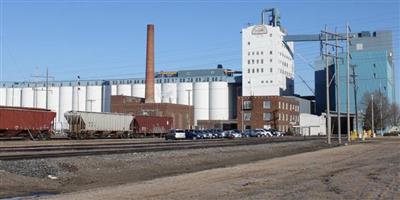 North Dakota Flour Mill Expansion Will Make It Biggest in US

BISMARCK, N.D. (AP) — North Dakota’s state-owned flour mill, which has stood for nearly a century as a symbol of the state’s socialist past, is coming off a record year and is poised to become the largest wheat-grinding facility in the nation, its chief executive said Thursday.

General manager Vance Taylor told the state Industrial Commission that a $27 million expansion of the Grand Forks facility is underway and should be completed next summer. The mill produces about 3.8 million pounds of flour daily, and the expansion will bump production by 30 percent, he said.

“An increase in demand from our current customers is what is driving this,” Taylor told reporters.

Taylor said the Grand Forks mill, the only such state-owned operation in the nation, currently grinds about the same amount of wheat as a Nabisco facility in Toledo, Ohio. The expansion would make the North Dakota mill the largest single milling site in the nation, he said.

The mill recorded a profit of $16.7 million in the year that ended June 30, up from $13.3 million in fiscal 2013 and the highest in its 93-year-history. More than half the mill’s profits go to the North Dakota treasury to finance a variety of state programs.

Taylor said first-quarter profits have dropped from a record $4.5 million last year to $3.3 million, which is still the second-highest on record. Taylor attributed the decrease to lower negotiated grain prices with suppliers than a year ago.

A Push to Drop Federal Protections for Wolves in Wyoming, Great Lakes States