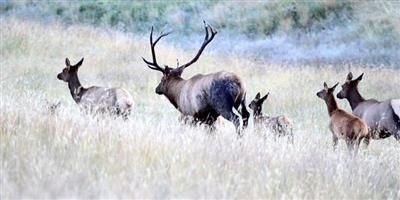 By: Chuck Denowh, Executive Director of the Rural Montana Foundation

Elk management in Montana is broken.  FWP’s estimated elk numbers exceed sustainable population objectives in three-quarters of hunting districts, and have for years.  It’s not uncommon for hunting districts to have five times the number of elk that they should.

Over the last decade FWP has done far too little to bring elk populations down to sustainable levels.  And in some districts they’ve intentionally limited hunting opportunity, for instance by limiting permits, despite chronically over-objective populations.  In fact, these limited permit districts tend to be the ones that exceed population objectives the most.

FWP has allowed this problem to grow to crisis proportions.  Their failure stems from a lack of innovation and misaligned priorities.

The current Elk Management Plan’s reliance on the general hunting season as the primary management tool has been a dismal failure, as evidenced by chronically over-objective populations.  The only program to incentivize hunting access on private land, block management, has been decreasing in popularity as payments to landowners have halved in real terms since the inception of the program.

Clearly, it’s time to try a different approach.  Unfortunately, most solutions that have been proposed to increase access and hunter opportunity have been blocked by special interest groups.  Shoulder seasons, damage hunts, increasing block management payments, lifting permit restrictions in over-objective areas—all of these approaches have received stiff opposition.  Too often FWP’s leadership has been cowed by social pressure to reject improvements in elk management instead of following their own science.

But change may be on the way.  Last year FWP initiated the first steps in what should culminate as a complete overhaul of the state’s Elk Management Plan.  This is an opportunity to finally get things right.

To assist with the update to the state’s Elk Management Plan, the Rural Montana Foundation recently released a comprehensive report, “Improving Elk Management in Montana.”  The report details the problems with the current approach to elk management and offers several innovative solutions that would increase access and hunter opportunity, address the concerns of landowners, and achieve sustainable populations.  You can read the report online at www.ruralmt.org.

The theme of the report is that landowners have been provided too few incentives to provide more hunting access.  That has led many landowners to view elk as a liability rather than an asset.  That mindset is reinforced when groups who benefit from large elk herds refuse to share in the costs that elk impose.

Elk management doesn’t need to be a divisive topic.  There are plenty of win-win solutions for landowners who provide elk habitat and sportsmen who want to see elk managed for the benefit of all.  The starting point is to find policies that allow landowners to share in the benefits of wildlife stewardship, not only the costs.

The statewide population objective for elk is 92,000.  It’s estimated today we have 175,000, and there is no current plan to bring those populations down to healthy levels.  It’s time to think big and get to work on a new Elk Management Plan that will truly address this crisis.