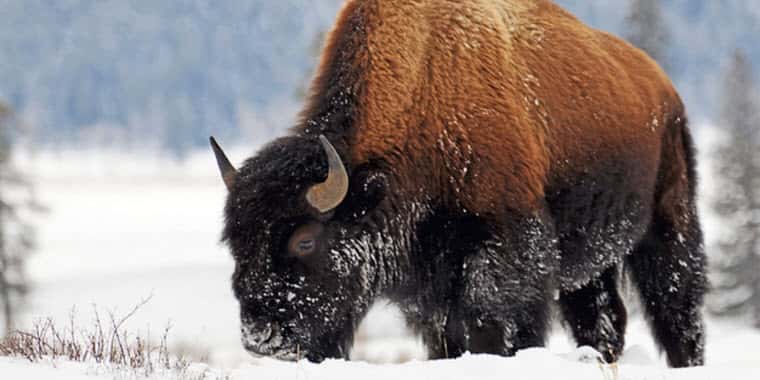 The Montana Department of Fish Wildlife and Parks is now formally recommending the introduction of free-roaming bison in Montana after the release of a long-awaited environmental impact statement.  It’s a move that dramatically intensifies conflict over wildlife management in Montana.

And worse, it’s a sobering message to the thousands of Montanans who provide habitat to wildlife.  FWP has made clear it would rather advance the agenda of a radical, out-of-state environmental group—the American Prairie Reserve—than give even the barest amount of credence to the virtually unanimous opposition to free-roaming bison from Montana landowners.

Let’s be clear about who is driving this process.  The APR derives nearly all of its support from outside Montana.  They are pushing a radical plan to depopulate several million acres in central Montana, replacing those communities with a playground for their wealthy donors.  In the process, their plan would remove a large chunk of Montana’s agriculture output from our state’s economy.

With the recommendation for free-roaming bison, FWP is signaling they’re a willing co-conspirator to the APR’s extreme agenda.

FWP’s recommendation goes directly opposite the policy mandated by Montana lawmakers just one year ago.  In HJ 28, the Montana legislature established a clear policy opposed to free-roaming bison, citing concerns over damage to Montanans’ public lands, threats to wildlife populations, and costs that would be borne by private landowners and rural communities.

Fortunately, FWP lacks the legal authority to unilaterally force free-roaming bison to be introduced anywhere in Montana.  But the fact they are so callously willing to thumb their nose at Montana’s policymakers brings into question what else they might attempt to do.

FWP often says they want decisions to be collaborative.  Actions speak louder than words.  The bison EIS shows a complete disregard to the Montanans who have real-world concerns about free-roaming bison—and at the same time bends over backwards to accommodate an out-of-state group dedicated to dismantling Montana communities.  There was absolutely nothing collaborative in FWP’s free-roaming bison recommendation.

The only people who matter in this issue are those with skin in the game—the real Montanans with something to lose if free-roaming bison are forced onto their property.  They’re fighting for their very lives and livelihoods against the out-of-state elites who want to wipe them off the map.  Who’s side should our Montana FWP be on?

Bison are dangerous animals and should never allowed to free-roam. APR is not in Montana’s best interest in any event.

Many “wild”, native species are “dangerous” if humans don’t respect their space, not just bison. Bison roamed the plains freely for many millennia before they were slaughtered en masse by the European settlers in their merciless endeavor to take away the Indians’ land and “settle” the American West. This is a tough subject – environmentalists vs the “long-established” (150 years) American rancher. It will never be resolved to the satisfaction of all.

Montana landowners need to cancel all Block Management agreements with FWP until FWP reverses their decision and supports Montana farmers and ranchers.

I totally agree, Close all our private lands to hunting, and file a class action suite against FWP. Sue them for trespass, pasture rent, and damages to fences, hay stacks, etc. They need to be held accountable for "their" animals.

As a born and raised Montanan I’m appalled by all the out of state influences that think they know what’s best for our state.
Thanks but no thanks, leave our state alone!!

Just wondering if APR is making a donation to FWP, maybe through a back door. Money seems to talk very loudly.

By way of funding liberal politicians like Bullock and Tester, yes. The best way to kill this idiocy is to vote Gianforte in as Governor and let him clean house at FWP. From Canyon Ferry, to griz hunting to the APR they are working against Montanans. Each election the liberals trot out fake "sportsmen’s" groups that are funded and run by out of state money.

Quit whining about Liberals as Conservatives are just as guilty in their own way. It is hard enough for hunters to access lands due to land owners land locking public land. Open up your land, because you have more damage from elk and deer today. There has to be a respectable compromise if bison are allowed to roam freely, and Slamin Gianforte is the wrong person for Montanans. Similar to Zinke he’ll cater to big businesses and place the small/average rancher to the wayside. Wilks Brothers are outside influence who bought up a large junk of land and land locked a lot of public land. Put the bison there, but then all we get is rich careless hunters out-of-state paying thousands to hunt. Wilks has some of the largest herd of elk and it is bound to cause significant disease bound to cross over to humans.

I have land for sale to hunt in another state right next to MT.
And you.are more than welcome to buy it.
Please do yourself a favor and stop trashing people who work the land for a living.
Bcs i would love to have a working relationship with hunters.
But attitudes like this make us all who own land want to shut the door.
Many that talk like this come.with a sense of entitlement about using our.land this way. And you make our lives difficult in many ways.
We end up not trusting you and working.with you bcs more trouble than you.are worth.

Same old same old. When it comes to MT-FWP, out of state interests (like APR, TU, Wolf lovers, etc) with money and fame always get to roll over Montana folks.

So we can have free roaming bison, but slaughter the wild horses? Who is marketing this propaganda campaign and who is buying it?

#1: Focus on protecting our farmers and ranchers and end this nonsense.
#2: We have many opportunities to expand habitat for bighorn sheep and mountain goat, providing more opportunity for Montana Sportsman. FOCUS YOUR EIS here
#3: Focus on protecting older age class Mule Deer in more hunting units.
#4: Allow more opportunities for Sportsman to harvest Bison in SW Montana instead of roundups and slaughter.

This will ultimately be a financial disaster for all the county’s surroundings FT. Peck. Loss of revenue from state school, farming and ranch tax dollars. Loss of income to all the business that support the ranchers. Total disregard for the grazing policy’s on and around the CMR. A state agency, Montana Fish Wildlife and Parks this has a total disregard for a large percentage of the sportsman who financed MTFWP in spite of our opposition to the APR. As much as I love to hunt I agree every rancher and farmer should pull their land out Block Management.

That is over hyped rhetoric and unnecessary scare tactic. Yes there is going to be damage by free roaming bison, but you already experience this with free roaming big game animals now. All to often landowners land lock public land and work against respectable hunters. If there is damage then file a claim.

I already replied to the Chris that replied to you.
But I am in disagreement with him and I agree with you.
Clearly, Chris has never had to apply for damages done by wildlife , to his ranch or farm.
And he has no idea what a circle jerk that process can be.

What is our next step to stop the FWP from doing this??? There are no shortage of Bison in this country and roaming free should not even be considered!! They are just large overgrown cattle and will destroy crops pastures and property of the farming and ranching families plus spread disease to livestock. We just do not need this. keep the bison under fence where they belong just like all livestock!!!! Ardelle Hart

The solution is to vote GOP.

Well this subject is good for the fund raisers. Buffalo are migratory animals which gives rise to a couple of questions. Migratory refers to Federal control, Eagles, Ducks, Geese, etc..
Wouldn’t it be interesting to get weather like we have seen since Sept. and see which town people will have to move out of to give way to a herd of Buffalo

I CANNOT BELIEVE THAT THE APR WOULD TRY SOMETHING LIKE THIS—THE PEOPLE WHO RUN APR MUST THINK THE PEOPLE OF MONTANA ARE VERY STUPID—-I WOULD CERTAINLY FIGHT THIS AS LONG AS IT TAKES TO GET RID OF THE APR. YOUR LOCAL LEGISLATURES WILL HAVE TO HELP AND THEY WILL. DALE MAHLUM SENATE DISTRICT 50

Be sure to vote next Nov. for a good republican governor. The CEO of FWP is appointed by the governor. This can all be changed at that time.

Start by electing a Republican governor who will appoint a reasonable director to the FWP and we might eliminate the blatant disregard to the voice of the people of Montana.

Bison were here first. I am a Montana rancher and understand the benefit bison bring to the land.

Deer, Elk, Moose etc are free roaming wildlife and they wind up on the highways. Imagine what a bison can do to a Prius. Let the lawsuits begin.

Is APR still funded by a Swiss billionaire – one who never saw a rural American that he likes? one who thinks that only wilderness in the west counts?

I think the real solution is to yes, bring back free ranging bison to Montana to flourish throughout the state. But, at the same time, allow ranchers, farmers, and other property owners to have legally regulated hunting of reintroduced free range bison, and collect trophy payments from hunters. That way free range bison can then with regulated trophy hunting, be transformed from being a liability for landowners, to becoming an asset for landowners with economic incentive. Just like how trophy hunting in such African countries as Zimbabwe, South Africa, and Namibia, provides the local African villagers with economic incentive for conservation of their local wildlife.