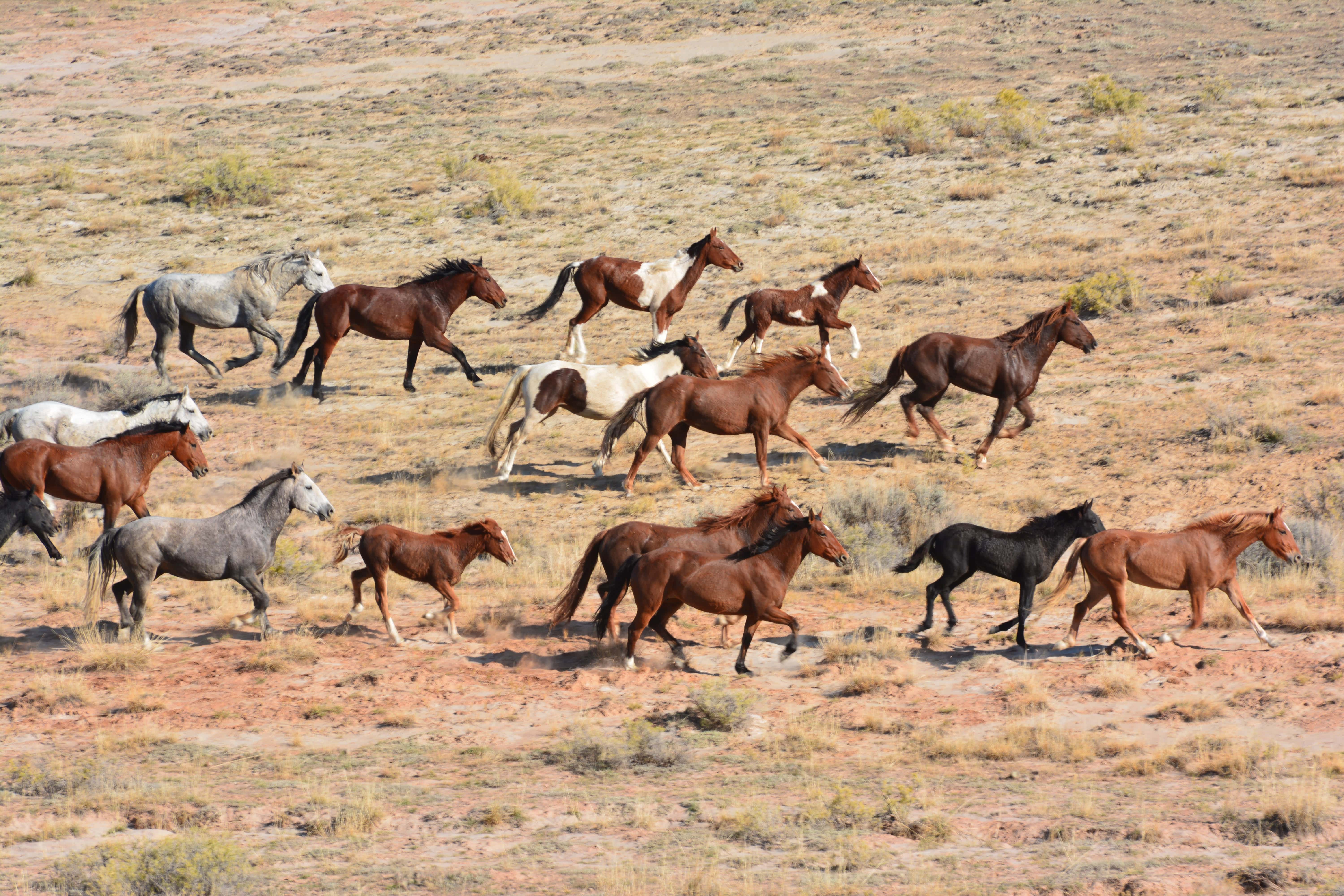 Record droughts in the West are causing the Biden administration to rapidly round up and move wild horses off public rangelands. Facing an increased risk of death from lack of water and forage, the Bureau of Land Management recently announced it is planning to remove more than 6,000 additional animals from the range by the end of next month and place them in off-range holding facilities. That’s in addition to nearly 1,200 animals that have already been gathered through emergency actions this year.

The question now becomes: What to do with these horses and burros? That is a challenge long fraught with controversy. To reduce ecosystem damage, get horses out of crowded holding pens, and save taxpayers money, one promising solution is to increase the adoption of these animals into private homes.

With the passage of the Wild and Free Roaming Horses and Burros Act in 1971, the BLM was tasked with managing the West’s wild horses. That job has proven to be arduous. The animals are spread over millions of acres, with populations that can double every four years. And there are several influential and vocal interest groups that attempt to influence wild horse policy, each of which has widely divergent views regarding management practices.

As horse populations grow beyond allowable numbers, the BLM periodically oversees gathers of “excess” animals, which, once caught, are held at government facilities and offered for adoption. If no adopter is found after three adoption attempts, a horse that does not sell for $25 is placed on private pasture. If that horse lives for 20 to 25 years, the cost of supporting it has been estimated to be $50,000, all borne by taxpayers.

Currently, about 50,000 horses are being held off-range at a cost of $57 million annually. Complicating things further, today, there are 85,000 horses on the range, whereas the BLM’s target maximum population is 26,000.  These numbers portend degraded rangeland ecosystems, starving and parched horses, damaged water sources, and displaced native species, as well as huge taxpayer costs.

In 2019, with input and encouragement from the Property and Environment Research Center, the BLM established an adoption incentive program (AIP) under which a qualified individual could adopt a horse and receive $1,000, with $500 paid upfront and $500 paid when title was transferred after a year. In the program’s first year, adoptions increased from 3,158 to 6,026 animals. The jump in adoptions saved taxpayers nearly $145 million.

The AIP is not the solution for all the BLM’s wild horse issues, but it helps place more horses in good homes, alleviate pressures on public lands, and save taxpayers millions of dollars. With increased adoptions, however, have come problems. Even though adopters are required to sign contracts stipulating they will not kill or sell the horses for commercial slaughter, the $1,000 payment has induced some unscrupulous individuals to collect the payments, obtain title to the horses, and then quickly sell them at auctions attended by slaughter buyers. In response, wild horse advocates have filed a petition calling for suspension of the program based on findings that horses adopted through the AIP have ended up in slaughter auctions.

Such problems are not new, and suspending a program with the AIP’s potential to find homes for horses and rein in taxpayer costs seems extreme. The BLM recently announced its decisions to enhance compliance efforts and continue the AIP, which will be a necessary tool to help find good homes for the 6,000 additional horses rounded up in response to this year’s drought. These additional horses will substantially increase treasury costs should they end up on long-term private pasture at taxpayer expense.

To offset these increased gathers, the BLM should consider modifying the AIP to increase payments to adopters. If the AIP payment is doubled to $2,000 and adoptions increase by, say, 2,500, then AIP program costs of $10.8 million would be outweighed by reduced treasury costs of about $270 million. We encourage the BLM to experiment further with AIP payment levels to identify the limits of the potential savings from the program.

Promoting adoption is a necessary piece of the wild horse management puzzle. Continuing the Adoption Incentive Program is a win-win-win solution for horses, taxpayers, and rangeland ecosystems.

Dr. Randy Rucker is a professor of economics at Montana State University and a research fellowship director at PERC—the Property and Environment Research Center—in Bozeman, Mont. Hannah Downey is the policy director at PERC.