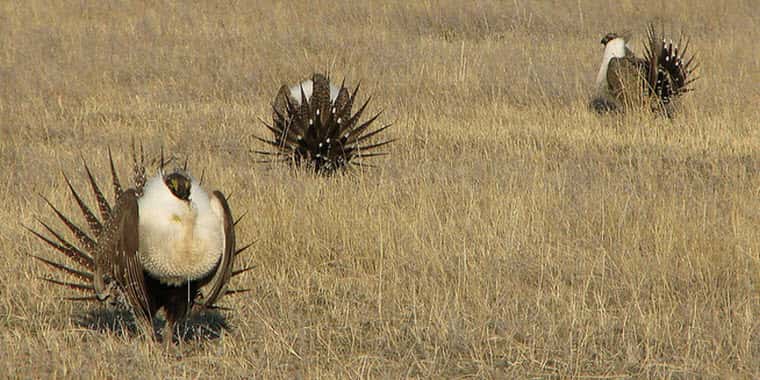 Other At Risk Species Aided by Sage Grouse Habitat Restoraton

The study shows that three years following the removal of invading conifers in a project area in southern Oregon, the number of Brewer’s sparrows increased by 55 percent, while the number of green-tailed towhees increased by 81 percent, as compared with sites not restored. These two songbirds, both identified as species of conservation concern by the U.S. Fish and Wildlife Service (FWS), serve as early indicators of the effectiveness of restoration work.

More than 350 species of wildlife depend on sagebrush habitat, and many species have suffered population declines because of threats like invading conifers. Conifers invade and degrade sagebrush ecosystems, dispersing the wildlife that once called the habitat home. Over the past two centuries, fire suppression, historic overgrazing and favorable climate conditions have led to spread of conifers into sagebrush habitat.

Aaron Holmes, director of Northwest Wildlife Science and a research associate with Point Blue Conservation Science, led the research for SGI, assessing the biological outcome of conifer cuts on songbirds in the Warner Mountains near Adel, Oregon.  The study was funded by the Bureau of Land Management, U.S. Fish and Wildlife Service, and Intermountain West Joint Venture, all of which are SGI partners.

Population increases each year after trees were removed suggest that growth in the populations of these two species may increase even more with time as displaced birds increase use of restored habitat.

Roughly 80 percent of invading conifers in sagebrush habitat are in early phases of woodland succession. Through SGI, NRCS helps ranchers remove invading conifers in places where trees are younger and sagebrush is still dominant. Since 2010, ranchers have restored 400,000 acres of sagebrush habitat through cuts. Nearly half of cuts are in Oregon, where conifer removal during SGI has increased 14-fold. Threat alleviation on private lands in Oregon is two-thirds complete inside of priority areas.

Ongoing conifer removal is part of a larger four-year strategy, called Sage Grouse Initiative 2.0, which NRCS unveiled last month. The strategy addresses other key threats to sage grouse by focusing on reducing the threat of wildfire and spread of invasive grasses after fires, protecting rangeland from exurban development and cultivation, protecting mesic habitats like wet meadows and reducing fence collisions.

Songbirds are not the only other sagebrush wildlife shown to benefit from sage grouse conservation efforts. In a companion study on mule deer, scientists in Wyoming found that conservation measures implemented to benefit sage grouse also doubled the protection of mule deer migratory corridors and winter range.

The deteriorating health of the sagebrush habitat and the greater sage-grouse has sparked an unprecedented, collaborative federal-state partnership. This comprehensive approach includes strong conservation plans for state and private lands, strong federal conservation plans and an effective strategy to reduce rangeland fire risk.

Learn more about this new data in SGI’s “Science to Solutions” report. For more on technical and financial assistance available through conservation programs, visit nrcs.usda.gov/GetStarted or a local USDA service center.