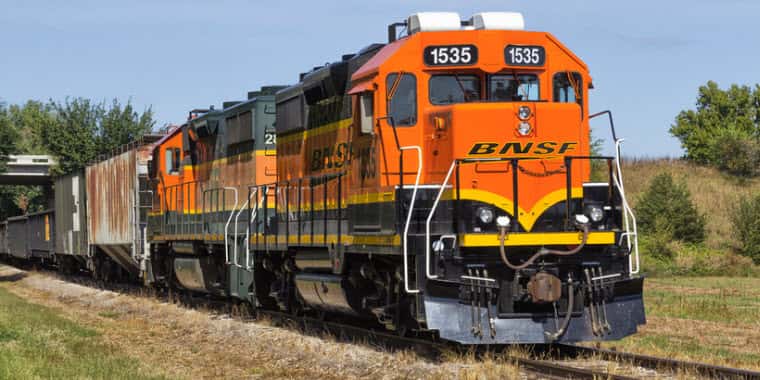 Great Falls – The service difficulties experienced by BNSF Railway in 2013-2014 appear to be resolved, with an impressive jump in turns-per-month for their shuttle fleet and a precipitous drop in the number of past-due orders for the less-than-shuttle cars.

All this is the result of record-breaking spending by BNSF for locomotives, crews, track upgrades and everything that goes with increased capacity, along with a more friendly winter and an easing of demand for grain and coal.

BNSF Railway has published new and increased tariff rates scheduled to begin May 1. Traditional regular and relatively small rate increases have been suspended by BNSF for nearly two years as recent awkward service problems created an expensive secondary freight market in which grain elevator companies traded freight among themselves at large premiums.

The new May 1 rates for shuttles are around $400 per car higher. Decline of the elevator-traded secondary freight premiums to zero or below is one factor which makes the tariff increases work in a market-based rail freight model. BNSF Railway is also ending its fuel surcharge program, rolling this cost into the tariff rate.

Though supportive of the transparency of a fuel surcharge program, representatives of the Montana Grain Growers Association (MGGA) have agreed in conversations with BNSF Railway that the program has been troublesome and complicates the calculation of freight costs.

In addition, BNSF has agreed that Montana markets would be better served with a lower rate increase and will remove $164 to $208 per car, depending on location. This reduction for Montana, along with lower fuel prices, yields a zero net increase for tariff-plus-fuel when comparing May 2015 to May 2014 rail rates.

This collaborative process, with BNSF considering Montana producers to be customers of their railway, and MGGA considering BNSF to be an input service partner, allows resolution of rate and service issues to mutual benefit. Returns to the Montana grain industry have amounted to tens of millions of dollars over the 10 years since we began this initiative.