As April arrives, the current drought situation looms larger and potential impacts on cattle markets are increasing with each passing week.  The latest Drought Monitor shows that 43.55 percent of the continental U.S. is in some degree of drought (D1-D4), including 18.06 percent in Extreme and Exceptional drought (D3-D4).

Along with the pandemic, the current drought began advancing in early March 2020.  The rapid progression of the drought this past year is faster than any drought in more than 20 years, since the Drought Monitor began.  An aggregate annual index of drought conditions is currently at the highest level (worst drought) since 2014. 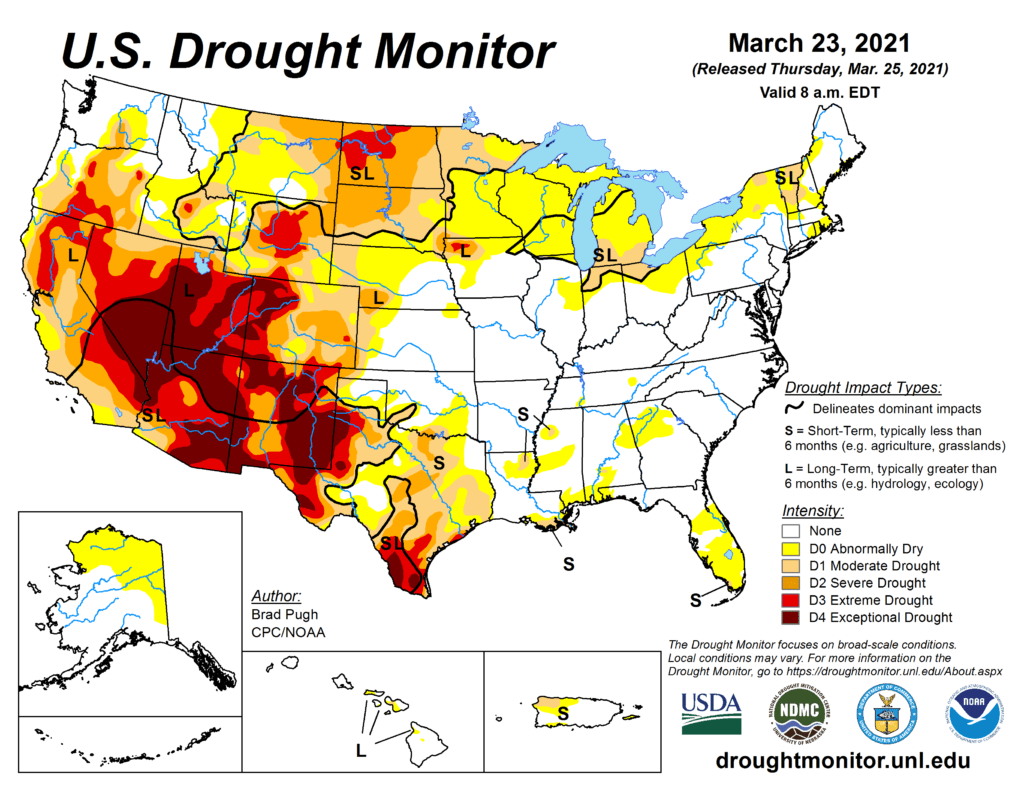 The growing season is just beginning from south to north, and with two-thirds of the country abnormally dry or already in drought, the threat of warm weather and persistent or advancing drought is a major concern for forage production.

As producers recognize and anticipate drought conditions they must assess and evaluate their resource situation, nutritional and health requirements of the herd and the economic considerations of input costs and the liquidation value of animals. At this level, producer decisions may have little or no impact on broader market values, except perhaps in localized situations.

If a drought is severe enough, over a big enough region, and lasts long enough, broader market values may be affected resulting in lower prices for cattle and higher prices for feeds and other inputs.  This can result in additional challenges for drought impacted producers as well as impacts on producers outside the drought region.

Expanding drought conditions in 2020 impacted many producers regionally.  The impacts were centered in Colorado where the beef cow inventory decreased by 14.5 percent last year along with a 16.1 percent year over year decrease in beef replacement heifers.  The cow herd reduction in Colorado was 112,000 cows.

Drought conditions plagued much of the desert southwest in 2020 but cow herd liquidation in Nevada, New Mexico and Utah totaled just 34,000 head.  As bad as they were, these cow herd losses were not enough to cause significant general cattle market impacts.  Significantly higher hay prices were noted in 2020 in the western drought region.

What does the current drought situation suggest about possible market cattle market impacts in 2021?  Recent rain and snow have alleviated some of the previous dryness in Kansas, Nebraska and eastern Colorado with enough moisture to ensure at least some spring growth. Oklahoma has generally adequate moisture at this time. However, drought is forecast to redevelop eastward into the central plains.

Arguably the most concerning areas now are North and South Dakota and Texas.  Persistence or expansion of drought in these areas (which have large beef cattle numbers), in conjunction with ongoing drought in Rocky Mountain and desert southwest regions could result in levels of herd liquidation/movement that broadly impact cattle markets.