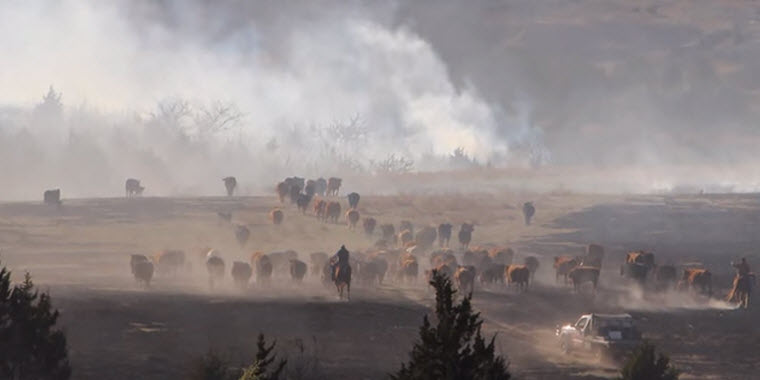 MEDICINE LODGE, Kan. – A long road ahead is probably the best way to describe the aftermath of the Anderson Creek wildfire in south-central Kansas, particularly for cattle producers who have relied heavily on grazing as the main source of herd nutrition. Not only are many pastures burned in Comanche and Barber counties, but the cattle are facing a variety of other health-related problems following the fire, said Kansas State University veterinarian Dave Rethorst.

Rethorst, who works in the K-State Veterinary Diagnostic Laboratory, has been in contact with cattle producers and local agricultural leaders, including K-State Research and Extension agriculture agent Tim Marshall of Barber County, about the wildfire’s repercussions. The wildfire burned approximately 400,000 acres March 22-25, according to the Kansas Department of Agriculture.

Following the wildfire, Rethorst said good animal husbandry practices are key. Producers are working hard to provide adequate nutrition to their herds and take care of ailments that range from burns to respiratory issues.

“There are ranchers out there asking, ‘Do we have cows alive and just haven’t found them? How many cows have I lost?’” said Rethorst. “Things we’re seeing short term are cows with burned feet. Their (hoof) coronary bands are burned to the point that some of those cows are starting to lose their hoof wall.”

Many of the cows directly involved in the wildfire also experienced burned udders, he said. Some of those cows are still producing enough milk to keep their calves alive, but many producers are having to bottle feed their spring-born calves using milk replacer instead. Producers downwind from the fire are witnessing most of the respiratory problems currently.

“They weren’t in the fire, but they got the heavy smoke,” Rethorst said. “Those calves are seeing runny eyes and respiratory problems. Many of the ones in the fire haven’t started seeing the respiratory problems yet, but I’m not sure producers are looking for that. They’re still trying to regroup and figure out what (cattle) they have left.”

Many producers in Comanche and Barber counties primarily graze their herds year-round, Rethorst said, and are now having to provide hay to their cattle—a foreign concept to some.

“We need to remember that those cows will eat about 3 percent of their bodyweight on a dry matter basis,” he said. “For example, if we have a 1,200-pound cow, she will eat 36 pounds of dry matter a day.”

As they heal, he added, they will need more than hay for adequate nutrition. They also need energy and protein supplementation daily until green grass begins to return.

“My recommendation is to back off what many producers are used to feeding, 40 percent protein cake formulations, and feed a 20 percent cake that has some energy in it,” Rethorst said.

On the treatment side, Rethorst said he realizes that producers might be overwhelmed by having to continuously treat a single animal, and some cattle have been sold. For the ones that remain, producers should monitor burned feet, burned udders and signs of respiratory infections.

Consider using antibiotic ointment on burned feet and udders to keep a secondary infection from occurring, he said. Death loss will likely happen due to respiratory problems from smoke inhalation, particularly in calves under a year old, just because their immune system might not be able to fight infection.

“In some of these young cows, it will probably affect their lungs for life. There’s little that can be done for that. Pull and treat the individuals. Get the calves on a good vaccination program,” Rethorst said.

Another anxiety following the wildfire is the co-mingling of cattle due to burned fences. Herds have mixed with other herds, which means diseases such as bovine viral diarrhea could potentially spread in herds that have never experienced it before, he said. BVD could come secondary to the onset of respiratory disease.

“Treat respiratory disease as you typically would: get an antibiotic in them, and make sure they have plenty to eat and drink,” Rethorst said. “Take care of them, and let their immune systems work.”

In addition to domestic livestock, wildlife were also affected by the Anderson Creek wildfire, he said, which is not talked about as much.

“The effect of the fire has been devastating on wildlife—the number of deer, coyotes and turkeys that have been killed,” Rethorst said. “The quail population had been coming back in that part of the state in the last two or three years. I doubt if there are any quail left.”

The emotional toll on producers is not talked about much, either. Rethorst said many producers are taking losses hard, because the fire got out of control quickly.

“They did their best,” he said of those producers. “Let’s not forget the people in that part of the state. When it’s in the news, we want to do all we can, but typically in three or four weeks when it’s not in the news, we tend to forget. We need to be prepared to support those people.”

Source:  K-State Research and Extension is a short name for the Kansas State University Agricultural Experiment Station and Cooperative Extension Service, a program designed to generate and distribute useful knowledge for the well-being of Kansans. Supported by county, state, federal and private funds, the program has county Extension offices, experiment fields, area Extension offices and regional research centers statewide. Its headquarters is on the K-State campus, Manhattan.

South Dakota Wheat Crop Could Be Smallest in 37 Years