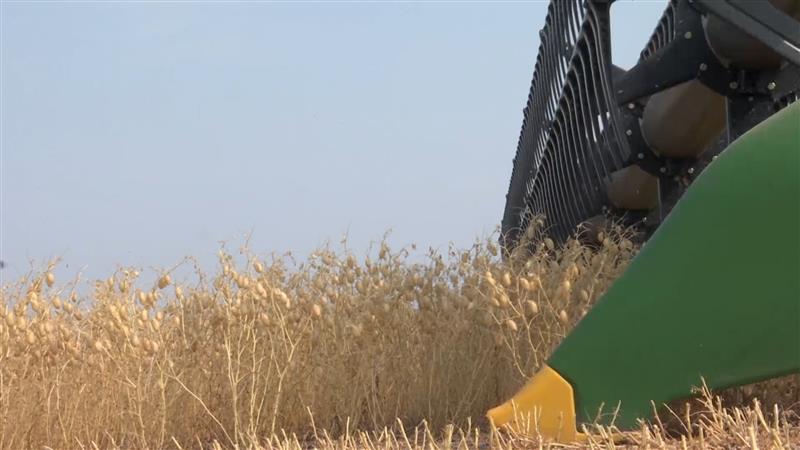 As harvest continues across Montana, it’s not just wheat and barley fields that combines are rolling thru. Montana farmers are also busy harvesting pulse crops.

“It takes a different mindset and a different way of farming to do it but it’s damn sure worth it I think” said CP Lee, Lee Grain and Livestock, Billings, MT.

For Montana farmers like Lee, wheat has been their primary cash crop. But today they’re raising more pulse crops like chick peas which provide growers like him both agronomic and financial benefits.

“Well, we just needed something different to be diversified and bring some more money to the table instead of fallowing that ground” said Lee. “And the winter wheat following any pulse crop is phenomenal.”

He says like wheat, it takes a lot of work to raise pulses. But as a farmer, he enjoys putting different seeds in the soil that have never been there before.

“You know you got to seed it, roll it, spray it and sometimes even spray a fungicide on it” said Lee. “This is busheling out to probably about 26 bushels per acre which isn’t the best but with the heat we had earlier this year this year’s crop isn’t too bad.”

Having different rotational crops is important for the soil’s health. And pulses provide a lot of benefits in this area.

Lee said “We aren’t putting much fertilizer down with this stuff when we seed. Where like wheat, we would be putting a lot of fertilizer down. It’s changing your modes of action of chemical when you spray and it’s good for the soil health too. And I think it’s also good for the wildlife and birds.’

Health conscious consumers here in this country and around the world are helping to drive demand for pulse crops.

“Hummus and stuff like that and the chick peas are in salad bars a lot and you can find the red lentils in soup” said Lee.

Because more traditional wheat farmers like Lee are giving pulse crops a try, it’s one of the primary reasons why Montana now leads the entire nation in pulse crop production.

According to the Montana Pulse Crop Committee, in 2009, there were just 350,000 acres of pulse crops and this year growers have planted 1.2 million statewide.