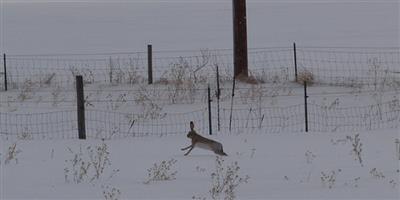 The rabbits were found dead by a landowner and reported to regional Fish Wildlife and Parks (FWP) staff. The rabbits were not wild, but instead appeared to be domestic rabbits that had previously been released in the area. Samples from the rabbits were submitted to the Foreign Animal Disease Diagnostic Laboratory in New York State where infection was confirmed. DOL is working to identify how the disease was introduced into Montana.

RHD is highly fatal. Infected rabbits may present with varying clinical signs including fever, sudden death, dullness, lack of appetite, wasting, diarrhea, neurologic signs, and/or respiratory signs with bloody discharge from the nose or mouth. RHD is spread by direct contact with live or dead rabbits, or indirectly through contaminated objects, including rabbit meat and pelts. The virus can also be transmitted from a person with contaminated hands, scavengers, or insects, and can remain infectious in carcasses or the environment for weeks to months.

The disease affects both domestic and wild rabbits. The virus does not affect humans or other domestic animals. There is no treatment for infected rabbits and population die-offs may occur when the disease is introduced into naïve populations. There is also no commercially available vaccine licensed for use in the United States. However, states with confirmed cases can request approval to import vaccines from overseas for limited use in domestic rabbits within the state.

“Because of the highly contagious nature of RHD and the high fatality rate, the Department of Livestock is asking Montanans to be vigilant and take necessary precautions to prevent further spread,” said Dr. Tahnee Szymanski, Assistant State Veterinarian. “Specifically, we are asking people to report any significant mortality in rabbits, and to comply with animal health requirements when moving animals across state lines.”

RHD is reportable in Montana, meaning anyone who suspects animals may be infected is obligated to report that information. Reports should be made for both domestic and wild rabbits. If you have questions or wish to report suspected cases of RHD in domestic rabbits, please contact DOL at (406) 444-2976. To report a wild rabbit mortality, please contact FWP at (406) 577-7880. For more information, view the USDA RHD Factsheet.

Will USDA Use the CCC to Pay Farmers for Climate-Friendly Practices?

Can some type f prey animal be increased to prevent wolves from going after ranchers babies ?