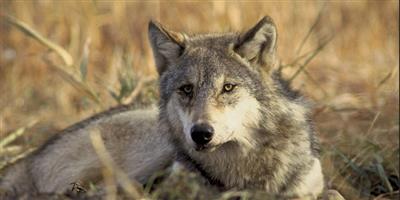 BILLINGS – A rancher legally harvested a wolf on his property 40 miles east of Billings Tuesday. The rancher, who held a Montana wolf hunting license, said he harvested the wolf after it chased some of his cattle away from a coulee where he was feeding them.

The wolf was a young male and weighed about 100 pounds. The rancher said he did not see other wolves and did not believe the animal killed or injured any of his cattle. Montana Fish, Wildlife and Parks officials inspected and tagged the animal Tuesday.

FWP wolf specialist Abbie Nelson said there is no way to know where the wolf came from. During this time of year lone wolves – and young males in particular – can travel hundreds of miles in search of a mate. Since the rancher did not see other wolves it is likely that the wolf was passing through the area, she said.

About 10 percent of the known wolf population goes into dispersal every year, a natural life history trait for sexually mature wolves, Nelson said. The average age of dispersing wolves is 2.5 years. The next month is breeding season for wolves, when they tend to move around more.

The average dispersal distance is 50 to 60 miles, but recent examples from Montana show that longer dispersals are not uncommon. Wolves have been tracked more than 300 miles from Jackson, Wyo., to Broadus and from Livingston to Canmore, Alberta.

Though some residents may be surprised that a wolf was harvested east of Billings, Nelson said it is not unique. While wolf populations and management activities are largely focused on western Montana and wildlands in and around Yellowstone National Park, wolves are not unheard of much further east. A hunter harvested a wolf in Valley County near Glasgow Jan. 9, 2019. And Nelson has heard recent reports of wolf sightings near the Crow Reservation. Last year biologists tracked a small pack of wolves from Wyoming through the Clarks Fork River drainage until one was harvested south of Joliet. Several years ago a collared wolf was tracked for weeks from northeastern Washington to central Montana, north of Judith Gap, where it was killed.

According to the 2017 Montana Gray Wolf Program Annual Report, population estimates suggest there are approximately 900 wolves in Montana, with an annual wolf harvest that averages about 225 animals.  During the 2017-2018 wolf season, 255 wolves were harvested: 65 percent hunting, 35 percent trapping. Approximately, $380,000 was generated for wolf conservation and management by wolf license sales.

Wolves may be hunted throughout the state, with a season from Sept. 2 through March 15.  Hunting wolves requires a wolf license, which can be purchased over the counter for $19 (resident) or $50 (nonresident).

Wolves may also be trapped ($20 resident, $1 resident landowner, $250 nonresident) from Dec. 15-Feb. 28.  Completion of either the Idaho or Montana wolf trapping certification class is mandatory.  Persons could take a combination of up to five wolves via hunting and/or trapping.

Wolf sightings do periodically happen in eastern Montana, but currently no wolf packs are known to exist in the eastern side of the state.

Though curious, wolves generally fear people and rarely pose a threat. Wolf attacks on people are rare compared to other wildlife species. Most are preventable. Habituation to people, conditioning to human foods, rabies and the presence of domestic dogs generally are contributing factors.

It is also unusual for wild wolves to associate or interact with people, linger near buildings, livestock, or domestic dogs. This behavior is more typical of a habituated or food-conditioned animal, a released captive wolf, or a released wolf-dog hybrid.

To learn more about Montana’s wolf population, visit FWP online at fwp.mt.gov and follow the links to “Fish & Wildlife” and “Wolf.”