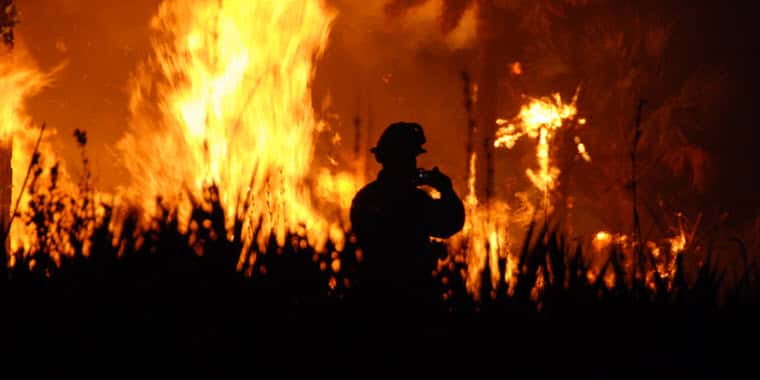 Cattle producers have started assessing their losses from the tremendous fires that have ripped through 4 states, fire crews are still working to mop up the blazes. Most of the burned land is in Kansas, where more than 1,000 square miles has been consumed in a series of blazes, including one believed to be the largest in the state's recorded history.

It is too soon to know yet how many animals perished. In Clark County, where Gardiner lives, ranchers so far have lost about 2,500 adult cattle and at least 1,000 calves, said Randall Spare, co-owner of Ashland Veterinary Center.

Ranch hands were among those who have been killed in the fires. In the Texas Panhandle, three ranch hands died trying to save cattle from fires that have burned nearly 750 square miles.

Gray County Judge Richard Peet said it appears 20-year-old Cody Crockett was on horseback and his girlfriend, 23-year-old Sydney Wallace, was nearby on foot as fire and smoke swirled around them. Peet says Wallace died of smoke inhalation. Crockett suffered burns, as did 35-year-old Sloan Everett who also was on horseback. Their bodies were found near each other.

A fourth person who died in Texas — 25-year-old Cade Koch — was attempting to drive home when smoke from a separate fire to the north enveloped him. His wife, Sierra Koch, who is pregnant, described her husband as a hard-working, friendly man who “treated everybody with the utmost respect.”

In Kansas, the Highway Patrol said Corey Holt, of Oklahoma City, died Monday when his tractor-trailer jackknifed as he tried to back up because of poor visibility on a highway, and he succumbed to smoke after getting out of his vehicle.

About 545 square miles also has burned in Oklahoma, where a woman had a heart attack while trying to keep her farm and died.

No deaths were recorded in Colorado, where more than 45 square miles burned.