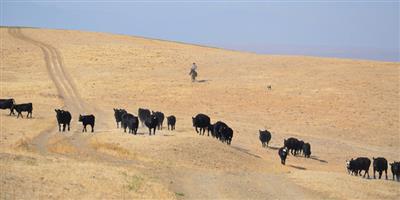 The most recent U.S. Drought Monitor indicated that 100% of North Dakota is in drought status, with 85% of the state in at least a severe drought category and 47% in an extreme drought category.

While the state is familiar with drought, the last time that the extreme drought category was initiated this early in the growing season was in 2008. Starting to develop or modify management plans in anticipation of the many challenges ahead is critical for producers.

With breeding season approaching, producers must think about how to manage during a drought to keep the most productive and valuable cows in the herd.

Culling is One Option

Culling is probably at the forefront of many producers’ minds. Typically, the properties that a cow possesses that get her added to the cull list include a bad attitude, old age and/or open pregnancy status. Additional considerations could include structural issues (feet and legs) and poor udders.

“Cows that are consistently calving late in the breeding season and weaning light calves are not profitable and should be culled,” advises Lisa Pederson, Extension livestock specialist at NDSU’s Central Grasslands Research Extension Center. “Because drought conditions are estimated to be widespread, it is a good idea to make plans to reduce herd size before the market is flooded with cull cows.”

Several computerized performance record programs are available to help producers develop a ranked list of cows based on factors such as calf weaning weight and other performance indicators. The NDSU CHAPS (Cow Herd Appraisal Performance Software) system is one example of this type of program.

Another way to increase efficiency during drought is to shorten the breeding season. Females that breed early are more likely to remain in the herd longer than those that conceive later.

Considering that the average gestation length is 283 days, cows need to conceive within 82 days of calving to maintain a yearly calving interval. In general, mature cows take a minimum of 40 days to recover from calving and begin to cycle. This recovery process may be up to 70 days for first-calf heifers or longer if they are thin or had a difficult delivery.

A shortened breeding season results in a more uniform calf crop and increased selection pressure for fertile and productive cows. This strategy also will increase the percentage of open cows, particularly if extended breeding seasons have been used in the past. One way to avoid drastic responses would be to shorten the breeding season gradually by two to three weeks per year until the goal has been reached.

Using an estrous synchronization protocol also could be considered to give more cows the opportunity to conceive. The ideal strategy and length of the breeding season will vary depending on feed resources and goals of the operation when considering drought management. Estrous synchronization protocols are available for natural breeding and artificial insemination situations.

House Cows in a Drylot

Limited forage supplies and/or grazing capacity may have some producers considering housing cows in a drylot during the breeding season. This strategy can make implementing estrous synchronization and artificial insemination protocols easier to do, and also can increase the number of cows that bulls can breed naturally.

Having cows in a drylot also can allow for increased monitoring and the ability to sort and feed groups of cows to optimize body condition. Having an area where calves can get away from cows and bulls is important. One idea is to provide a nearby “creep pasture” for calves where they can get out of the drylot and graze.

“Ultimately, thinking about ways to manage the breeding season during drought comes down to strategic use of feed resources and increasing efficiency and productivity in the cow herd,” Block says.

For more information on herd management and culling during drought, range and pasture management, water quality and other drought-related topics, visit www.ag.ndsu.edu/drought.