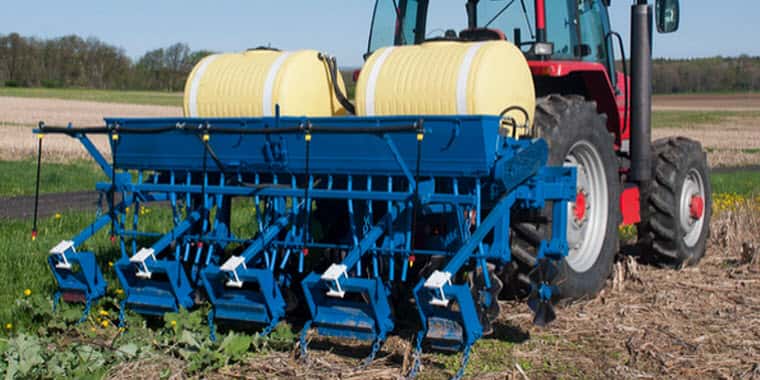 Innovation comes from many different sources and this would certainly apply to advances in modern farm equipment. While many new technologies come from the major farm equipment manufacturers, some ideas do come from other places.

With cover crops becoming popular with farmers in recent years, researchers at Penn State University (PSU) tried to find the most efficient way to plant cover crops in an existing crop. The Penn State Interseeder just might be the way.

Since 2010, researchers have been trying to produce an efficient way of seeding cover crops. Before creating their own seeder, PSU researchers experimented with aerial seeding with mixed success. Crop duster-style planes were contracted to fly low over university corn and soybean fields late in the growing season and spread winter canola and yellow sweet clover seed.

“However, these efforts showed us that simply broadcasting cover crop seeds late in the season was not a consistent answer to the problem,” Greg Roth, PSU professor of agronomy, said in a press release.

Roth teamed with Chris Houser, PSU Extension educator; William Curran, PSU professor of weed science; and Corey Dillon, a PSU farm operations technician and graduate student, to try to develop a piece of farm equipment which could plant cover crops in existing crops. The machine needed to plant cover crop seeds between rows of growing crops, but it also needed to spray a post-emergent herbicide and apply fertilizer to help establish the cover crop, he said.

“Before this, farmers could not get a cover crop planted before the onset of cold weather. By the time they harvested their corn in the fall, it is too late to plant cover crops and expect much growth,” he said. “So we built on our experience and created a machine capable of planting cover crops, such as annual ryegrass and red and crimson clover, among corn that is 12 to 20 inches high in late June.”

After applying for two patents on the device, the team in late 2013 decided to license the technology from the university and start a company called Interseeder Technologies. After several years of field trails and improvements made to the machine, the company found a Pennsylvania manufacturer to build these machines and then began to market the implements.

“We started a campaign, and we started marketing Interseeders here in Pennsylvania and elsewhere,” he said.

Roth said machines are now operating in Pennsylvania as well as in Maine, Minnesota, Vermont and New York State.

Cover crops help control ag runoff and nutrient pollution, and this is not just an issue in the Chesapeake Bay region. Farmers in areas such as Vermont, with Lake Champlain, and in western Ohio, where they have had issues with Lake Erie water quality and algae growth, have expressed interest in the concept and the machine, he said.

Roth said he realizes it may take a generation or more before widespread interseeded cover crops is a practice fully adopted by most farmers. He and his team, however, are satisfied to contribute to conservation and build a business at the same time, which expands the typical roles of agricultural researchers and educators to ag entrepreneurs.

“It is kind of a neat concept, coming with a Pennsylvania idea, manufacturing it in Pennsylvania, benefiting Pennsylvania farms and farmers and then providing some funding back to the college through licensing of the technology,” Roth said. “For most of my career, I didn't appreciate this model, but now I can see the wisdom of having students, faculty and staff become involved in commercializing technology transfer in a partnership with the university.”

CLICK HERE for more information about the Penn State Interseeder.

Researchers identify new strain of deadly pig virus in US