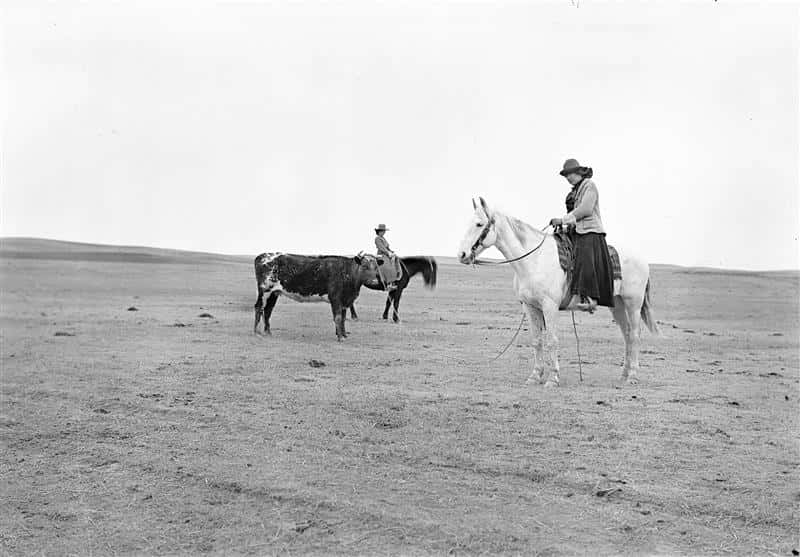 Frontier photographer Evelyn Cameron simply identified these two women on horseback as the Buckley sisters.  The cow with the rope around its horns wasn’t putting up much of a fight in this 1914 Cameron photograph, but it looked like the sisters knew what they were doing.

Note:  Born in the saddle and taught by some of the top cowhands in the area, the Buckley sisters were well-suited to running a ranch. Proficient at roping, riding, breaking broncs and branding calves, their skills were comparable to Montana’s best cowboys. Respected by their male counterparts, they earned the nickname “Red Yearlings” because of their strawberry-blonde hair and expertise as horsewomen.

Their father had enough confidence in their skills, that he turned over the Montana ranch to the sister to run, while he went back to North Dakota to run another operation there.

Known throughout eastern Montana, the beautiful Buckley sisters were to gain national and international fame during their early twenties when Evelyn photographed them for her article about Montana cowgirls, which appeared in the June 6, 1914, issue of the English publication Country Life. Neighbors of Evelyn’s, May, Myrtle and Mabel were regular “action models” for the photographer.

Even before Evelyn, folks who recognized the Buckley sisters’ talents had tried to showcase them. Wild West shows asked to hire the sisters, but they weren’t interested in entertaining audiences. They “never competed in a rodeo or performed with a show,” recorded rodeo historian Mary Lou LeCompte in Cowgirls of the Rodeo. The Buckley cowgirls even declined an invitation from Teddy Roosevelt, who knew them from his many visits to Terry, to perform at the White House. The sisters were “serious cow people with ranching their only focus,” Roose says.

For more information about the Buckley Sisters:

Tracking down the three Montana sisters captured by Evelyn Cameron’s camera and admired by Teddy Roosevelt.